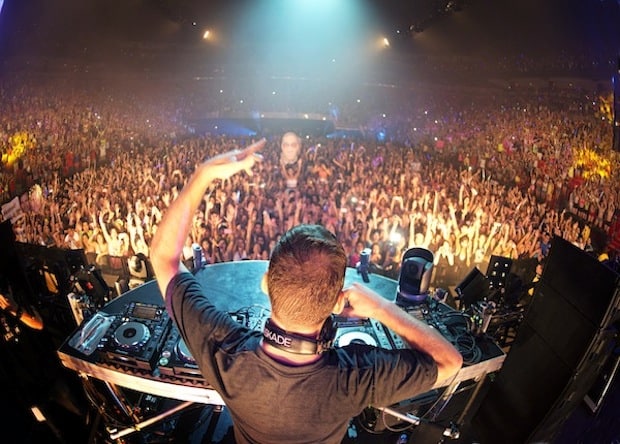 Kaskade announced a big rooms, small tour in support of his “Atmosphere” album early this year, which after much anticipation was finally released on September 10th. Just four days after that, the Mormon DJ took hold of the stage for his first show out of six in none other than Miami. After his “Freaks of Nature” Miami stop last year the Magic City was holding their breath. Given that he made it rain that hot July 14th night during his encore to the tracks “Raining” and “I Remember,” and then magically stopped once he was done playing, we were eager to see what the DJ had up his sleeve for an arena performance.

Late Night Alumni and Amtrak set the tone for Kaskade, both performing funky groovy beats that the 10 year olds in attendance had probably never heard before. That's probably the only downfall to this tour – the fact that it's all ages, with the exception of the three shows in Los Angeles the are 18+. But hey, who better than Kaskade to educate youngsters on dance music responsibly. He doesn't drink, do drugs, or believe in sex before marriage. He does, however, believe in free love and a dramatic entrance, which is what EDM is all about, right?

After local opening act Amtrak paved the way for the artist, Kaskade appeared on a larger stage across the arena. Fans ran through the floor general admission area as he took the stage and sang the song to which his tour is attributed to. “When I was young, I would stand alone, with visions of worlds that were all my own.” Maybe the reason he opened this up to kids is to let them know that they aren't alone. And that he was just like them, like you, like all of us once upon a time – young, alone, and scared of the world. This is no longer the case, for Kaskade at least, who's transcended into a world of peace, love, unity, and respect. And his music, his old music, and this album is just about that – PLUR. This show wasn't just about his old music though. He married the old and new, going into “Move for Me” right after “Atmosphere.” A different performance than his “Freaks of Nature” tour, Kaskade really focused on building up the atmosphere (get it?).

He didn't just put on a show for those who had general floor admission, or who were lucky enough to gotten seats close to the main stage. Halfway through his 90 minute set, the supernatural DJ pulled a Houdini act, disappearing in a cloud of smoke and reappearing on the smaller stage where Amtrak and Late Nigh Alumni had set up the mood for him. You can imagine the crowd's reaction – the atmosphere changed instantly. At this point one knew to expect him to pull another switcharoo to go back to where he came from. This time it wouldn't catch you off guard, right? Wrong. In another flash, Kaskade disappeared again, moving as quick as the atmosphere when a tornado is developing. And just when we were ready to be blown away by him teleporting back to the main stage, we were graced by an angel – Skylar Grey. “Room for happiness” filled the entire AAA, leaving one to wonder how it's ever possible to feel anything but happiness. The singer is joining Kaskade on the remaining five shows of the tour. This was definitely the highlight of the show. We give it to Kaskade for singing his own vocals – a first for the artist in his entire career – but nothing compares to the voice of this singer. Expect the chills.

At this point it became evident that everything Kaskade has been doing his entire career was all for this. For the past 16 years the artist has been building the “Atmosphere” to come out with an album that represents the entirety of his musical existence and that tells the journey of what it took him to get here.  “In 1997 I put my first record out and traveled all the way from San Francisco to Miami during WMC and ate peanut butter and jelly sandwiches all week. I love you guys. You mean so much to me!” It all made sense now. That's why he started this tour here, cause although the artist got his start in San Francisco, Miami is what made him supernatural. What started off as a tropical storm atmosphere hit Miami as a category five hurricane, but without any damages. Instead, he saved us all.

As his soulful tune “Something, Something” says – “I don't need you, I just want you…” The opposite is true for the world and Kaskade. We need you. Always and forever.

While everyone knows who deadmau5 and Marshmello is, there's tons of lesser known side projects and alter aliases in the EDM community. While many...