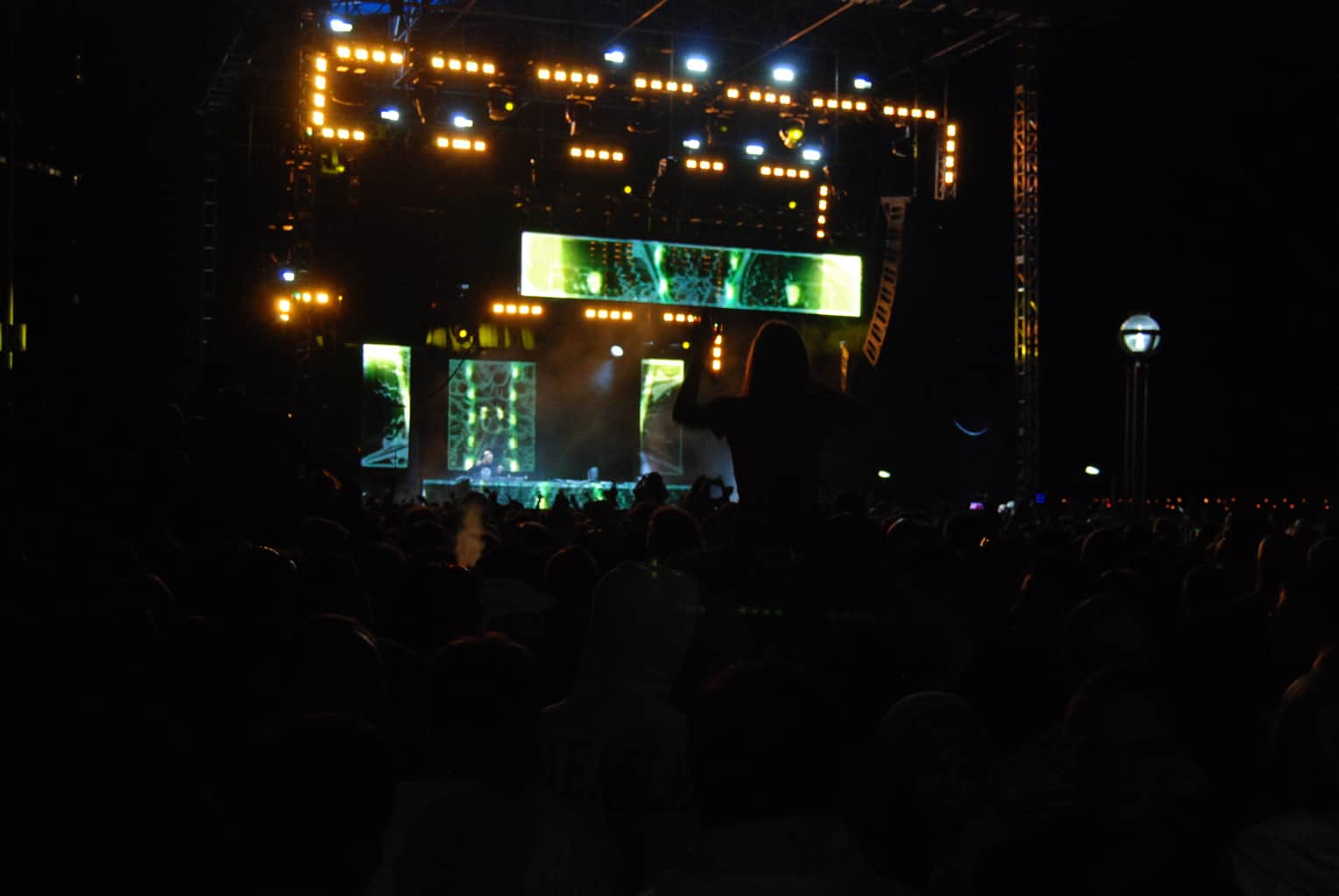 And thus begins the festival summer festival season… or at least the festival season. With temperatures only getting into the low 70s, the summer was put on hold for at least the weekend in Detroit. Despite the less than ideal conditions, the heavily local crowd came out in large numbers this Saturday to represent the birthplace of techno with full gusto at the Movement Electronic Music Festival. The festival was complete with a rumor about an appearance by Daft Punk, five stages running twelve hours of a slew of styles of electronic music and Fedde Le Grand’s “Put Your Hands Up For Detroit” only being heard once on day one.

At what is unofficially the main stage, The Red Bull Music Academy Stage, the highlight of the day was the founder of Movement (originally called the Detroit Electronic Music Festival, aka DEMF), Carl Craig. Dressed in what only can be described as ode to Morpheus from “The Matrix,” Craig played an hour and a half as the sun was setting. Craig was his usual stoic, calm self as he plowed through his set, almost as if he was practicing in the studio and not DJing live.

Craig’s polar opposite was a fellow Detroiter, Al Ester at the Made In Detroit stage, where local DJs had their chance to shine. Ester was alive, vibrant and it seemed like DJing was almost getting in the way of his dancing and interacting with individuals in the crowd. It was later in the night on the same stage that Terrence Parker, the father of Gospel House, scratched to pieces the vocal cut from “Put Your Hands Up For Detroit.”

Over at the Electric Forest stage right up against the banks of the Detroit River, dubstep and drum & bass was on the menu with the likes of Downlink, Noisia and Andy C. Downlink, in his Deftones t-shirt, brought an extremely hardcore dubstep set including the Brillz & Z-Trip trap remix of Jay-Z’s – “Dirt Off Your Shoulder.” Downlink’s aura was complete with his own signature dancer scantily clad with a ripped up t-shirt emblazoned with “Downlink.” The Electric Forest stage was everything I had expected it to be with Downlink but the most surprising part of the night was the biggest name: Moby.

At the entrance to the Beatport stage where Moby was performing, the sign clearly indicated in big bold letters that this was just a DJ set and not going to be a presentation of Moby’s hits. Even with this warning, the set that Mr. Richard Melville Hall laid down was nothing sort of shocking… in a good way. The pandemonium began with a calm five second clip of Moby’s “Natural Blues,” to mark the entrance of the self proclaimed “little idiot.” Then Moby took the crowd out of the eye of the storm and into the maelstrom of a set full of hardcore electro, rave and energy to match it. The 47 year old treated the stage as his personal jungle gym while hearkening back to his punk days, in his Motor City Hardcore sweatshirt, by yelling at the audience to go just as hard as he was. Never was a more apt sign held at a show than the one near the front that read “Is This Real Life?” It was hard to believe, and oddly refreshing, to see the man who produced “South Side” drop tracks such as Moguai’s remix of Fatboy Slim’s – “Ya Mama (Push the Tempo)” and Fukk Off’s – “Rave Is King.” Hopefully, Moby ended night one on a crescendo of energy that will continue into day two and day three.

Stay tuned tomorrow for the highlights of day two including an interview with Big Chocolate!