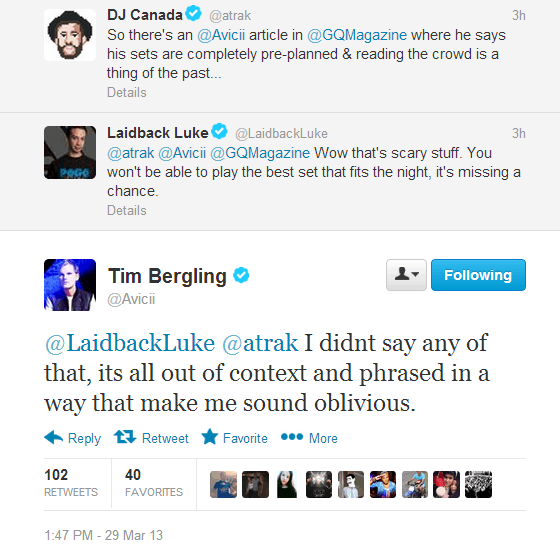 If you haven't picked up a GQ magazine to read about Electronic Dance Music, you're not alone. This is mainly due to GQ's ability to misconstrue everything about EDM. In essence it seems that they simply do not care about the industry.

The other day A-Trak and Laidback Luke happened to find the article where they read that Avicii said that the sets are “pre-planned” and that “reading the crowd is a thing of the past.” (As Shown Below)

Avicii quickly fired back though saying that he didn't say anything and it was all out of context. In fact, just 20 minutes ago, Avicii aka Tim Bergling felt so wronged by the article that he decided to post about it to his Facebook to explain not only the article but also talk about the reporter, Jessica Pressler of GQ Magazine.

He continues on to say that

“We agreed to let GQ into our camp to actually portray a serious side of this music to the masses who might not now and might not understand. We hoped they could unveil and communicate the reason for there being so much love within, and how such a great community has risen organically for, this music genre. The problem was that a journalist that knows nothing of electronic music was sent to be on the road with me for a couple of days and then tried piecing together what it's all about. She failed miserably”

This isn't the first time GQ or a Fashion magazine has mistranslated EDM and unfortunately it probably wont be the last.