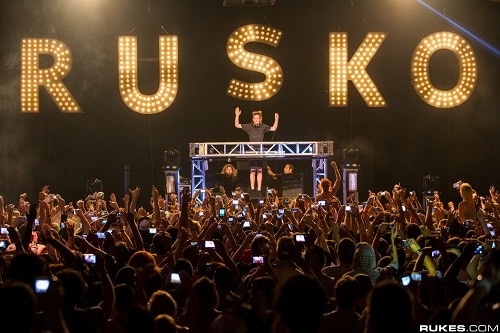 It was a freezing night, with the wind galloping down the streets of New York City.  I walked into the warm warehouse of Pier 94 immediately blasted with flashing lights, upbeat tempos, and colors that can only be seen at an EDM concert, or in a Crayola crayon box.  I began to shake in my Nike's, overwhelmed by the biggest stage I had ever personally been to.  Thousands of people began to pile into Pier 94 while the opening acts of Sazon Booya, and Leroy Stylez were warming up the crowd for an epic night of mischievous partying.  Sazon Booya had an upbeat style of Moombahton that was perfect for getting the crowd moving.  They kept a club atmosphere that was familiar to most people at the show, which is why they were the perfect opener.  Though they played it safe, I do not blame them since it was one of their first thousand persons show.  Over all I see a bright future for them.  Leroy Stylez is a new DJ to the large concert scene as well.  I could tell that he was a bit overwhelmed by the whole experience due to his lack of movement, his minimal speaking, and his focus on mixing the songs.  He kept a calming atmosphere with constant fog, minimal strobe light use, and an awesome remix of “Feel so Close” by Calvin Harris.  Then out of nowhere he broke open his vault and dropped some fist pumping remixes like “Analogical” by Dada Life, “Brap” by Bart Bmore, and “Toulouse” by Nicky Romero.  No one in the crowd expected to be this blown away by someone this unknown.  There is only one way that I can describe Leroy Stylez way of performing, and that is with a style of house that I have come to call “Glacial Style”.  Leroy came into his set very slow with a few body moving songs that began to shake the house.  Then out of nowhere he hit the crowd with a massive wall of sound and bass that destroyed everyone in it's path; just like a glacier.

Rusko jumped right on stage while Leroy Stylez final song was playing.  He was wearing an upside down, abstract American Flag on his shirt, and all I thought was, “Wow, is that not the truth?!  EDM has truly flipped America upside down.  The dubsteppers, the hardstylers, and the house music junkies have perfectly connected with the minds of the young people to make EDM the ruling genre of music in the United States.”  If you know anything about Rusko its that he loves what he does, and he lets the crowd know it through his performances.  But  it seemed like tonight he was on a whole new level.  I knew from the start that this was an all new Rusko with a full head of hair, and a new EP “Kapow” packed into his already deadly aresenal.  Rusko dropped the bass like an atom bomb from the calm sky that was Leroy Stylez, starting with a remix of “I'm different” by Two Chainz which got the crowd begging from the start.  Among the onslaught of remixes like “Ride With Me” by Rosonix, and “Lick it” by Skrillex, Rusko threw in a remix of “I Can't Stop” by Flux Pavilion.  This remix was colossal and surprised everyone.  If Flux was there then he would have said “Challenge Accepted!!”  The show rolled on with no surprises until one point when it seemed like Rusko had messed up on a transfer, but quickly saved himself with his most famous song “Somebody to Love”, as well as mixing it with the remix by Skream.  In the distance I heard what sounded like a faint guitar riff from the song “Money For Nothing” by Dire Straits, but at first I thought, “No way is he about to remix that song.”  Then the riff got louder and louder, soon Mark Knopfler's iconic guitar riff soared over the crowd with no other noise until the drop came.  I know that no one at the show besides me knew what that riff was from, but it did not matter, Rusko had successfully taken two seperate generations of music, and mixed them together for a sound that everyone loved.  Another part of Rusko's set that stuck out to me was his remix of “Nuclear (Hands Up)” by Zomboy because, Zomboy is not that well known but definitely has some talent which everyone at that show now knows.  Many people criticize EDM artists for not actually being musicians, but from watching Rusko's performance, those people are definitely wrong.  I'll admit that some EDM artists are definitely just button pushers, but Rusko is more than that.  He is an at the moment Composer, fine tuning every instrument in his orchestra, well… CD case.  Some EDM performers just hit the play button then throw in some cool effects, but Rusko was able to mix Cd's, throw in effects, connect with the crowd, match beats, switch genres smoothly, and overall create a sound that both he and the fans loved.

While Rusko's remix of “Lose my Mind” by DMX was fading away, Diplo strutted on stage with his head held high.  Over the past year or so Diplo has been throwing sets of “Trap” music into his shows.  This time he popped the roof off with quick “Trap” bass drops of “Oh My” by the Partysquad, and his remix of “Demons” by Sleigh Bells.  These two songs set the standard for the rest of the show, which was HIGH!  Diplo did not disappoint.  The entire show was built on a foundation of trap music, with house and electro-step songs used as the framework.  He played some crowd favorites such as “Spaceman” by Hardwell, “Rattle” by Bingo Players, “Satisfaction” by Benny Benassi, and “In My Mind” by Ivan Gough, all of which were trap remixes.  Diplo was driving an eighteen wheeler right into the audience with horns blasting, but instead of the incessant noise that is usually produced by a horn, there was beautiful trap music emitting from it.  At one point after playing his classic “twerk” song that he is most famous for, he stood in front of the DJ booth with a water in one hand and his shirt in the other.  He was looking out into the audience of thousands of people, and we knew what was coming.  Diplo sprinted forward and jumped into the crowd.  There were balloons bouncing around, confetti flying everywhere, and explosions of light all around him.  Diplo looked like a king who had just come home from battle with the enemies head on a stake, and we were the townspeople cheering him on while throwing rice.  The show was a non-stop bombardment of the ear drums, a constant “pick-me-up” for the hips, and to think that it was not even over yet.

The warehouse lights faded into darkness; thank you Avicii; and a clock that started at one minute came up on the mega screens.  We all knew that it was time for the man that everyone came to see, Afrojack.  Right before he came on stage the crowd started a “Hey ohh” chant which resonated through the entire building, and probably for a few more blocks outside.  When the clock finally hit zero Afrojack appeared behind the DJ booth with lights blaring behind him.  I never realized how tall he actually was, but when I finally saw him, he reminded me of the Persian King Xerxes.  I am sure he felt like the King of Persia while he stood in front of thousands of people screaming his name, sipping Grey Goose right from the bottle.  We all know that Afrojack is a household name since he has produced or helped to produce many top songs such as “Titanium” and “Look at me Now”, as well as having two Grammy's under his belt, but personally I was not impressed with the performance.  I respect him as a musician and producer, but his performance overall was not that good.  He had no unexpected twists, no extremely difficult song transfers, and he kept to the same form of house the entire time.  I like to see a challenge, someone who is going to get up there, show the crowd that they are the best at what they do, and shove it down anyone's throat who says otherwise.  Usually the audience is most psyched for the headliner, but after Afrojack played a few songs I saw people begin to leave the venue.  Even the people in the VIP section sat down during his performance.  I am not saying that he is a bad performer, but this time it was very mediocre.  I will say this, he played a few of songs that are coming out on his new album and I am definitely excited for those.  It sounded like he was pushing the limits between house music, and the deep bass that we hear in dubstep.  I hope this now becomes a challenge for Afrojack, to push his limits, and to not play it safe at shows anymore.