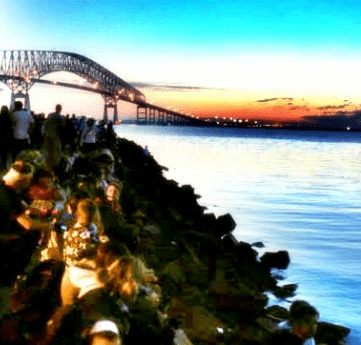 Last night I had the opportunity to attend Starscape up near Baltimore Maryland.
VENUE: Fort Amistad Park, which can only be described as “way the fuck out there” – parking was a 30+ minute walk from the venue (it was literally miles). That being said, “Wow.” Two of the main stages were by the water, which was awesome.
HEADLINERS: Wolfgang Gartner, Dada Life, Zedd, Flux Pavilion, and Dillon Francis.

REVIEW #1: ADVENTURE CLUB
I arrived late, so my first act to watch was Adventure Club on the Sunrise Stage. The glow of lights on the water, the energy in the music, and the fun mood of the crowd was truly intoxicating. Reviewing these guys is difficult because I'm biased – I LOVE their sound. Their tracks are the perfect blend of romance and rage, and you could definitely tell that by the crowd composition. The only real downside to their set was the random dude rapping over their tracks. I wasn't that into him covering up the music and flailing about. Especially since he was blocking the view of AC (who are screamingly fine, much to the joy of the many ladies in the crowd).

REVIEW #2: KILL THE NOISE
KTN completely *completely* blew me away. What? Who? Yes. We walked into the midst of some technical difficulty, so the vibe was meh. But within minutes, the Dance tent was a mass of screaming, jumping, dancing, laughing idiots and I was definitely one of them. His remix of Knife Party was one of the best songs I've heard all year, and I thought there was 1) no remix of Knife Party I haven't heard and 2) no remix I'd ever want to hear since that song is seriously overplayed. I was wrong. He followed that up with a shrill, pulsating remix of Antidote that made the crowd go nuts. What really set him apart though was that Kill the Noise was so responsive to the audience. He was singing the lyrics! He was dancing! He was loving that shit! You could tell this DJ is 100%, heart and soul, into the music. And people definitely responded to that.

REVIEW #3: WOLFGANG GARTNER
Wolgang. The crowd loves him, he's well known, he does more than just remix. But his set was kinda…ho hum. There was nothing really new. It was good, don't get me wrong, and I have nothing to complain about. Redline is fantastic live, and although it hasn't been as popular, it may be one of the best tracks he's ever made.

REVIEW #4: FLUX PAVILION
Another surprise was the set by Flux Pavilion on the Main Stage. I'd never seen him in concert before, and I was amazed by his versatility. As a rule I tend to avoid heavy dubstep artists since I first came to love electro via the progressive house genre. But Flux in person had a very fast, bouncy set and he really eased the crowd into the wubwubwub. As a result I felt his tracks were balanced in their composition, and at no time did I feel overwhelmed by the dubstep. I am now officially a fan of FP, though I'll probably not put him after Arty on my playlist.

REVIEW #5: DILLON FRANCIS
The most popular DJ of the night appeared to be Dillon Francis. His stage was also on the water, which might have had something to do with it – it was nearly impossible to move. We didn't stay very long as a result, but what I did hear sounded great. The crowd seemed to be really loving it, though it was mostly via smiling and not dancing/jumping.

CONCLUSION:
Overall, great night for $80. I think though if you're comparing, Identity Festival is cheaper, Ultra is more fun, and Electric Zoo has a broader range of artists. One of my major complaints about this festival as a whole was that every artist was very dubstep oriented in almost every track. There was no respite for people who wanted pure electro, or EDM, or chillstep, or trance. Every stage was screaming super bass. And that may be fun for an hour (or 3) but 10 hours is a long time.

Twitter can be a wild place, especially when it comes to dance music. Some good and some bad comes from the twittersphere with as...

Duo Focus Fire have been on a roll in 2019, their engine of releases keeps churning with a new single out every couple of...