After Don Diablo premiered “You Can't Change Me” at this year's Tomorrowland, fans have since been eagerly awaiting its official release. Anticipation grew after a tease of the track on Twitter days before the release. Finally, on December 15th, Don Diablo's newest Future House project was made available. Don Diablo's trademark sounds found in his latest track indeed say that he cannot be changed.

The futuristic bass lines stand out instantly. This is part of the instrumentals which Don Diablo said were inspired by movies like “Interstellar” and “Star Wars”. The track is upbeat and highly energetic while still making it's stand in the lyrics:
24/7 you keep stressin' me
To do the things I won't do
Or be something that I don't wanna be
You can't change me, or rearrange me
Don't waste your time, baby can't you see?
That you can't change me 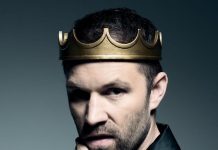