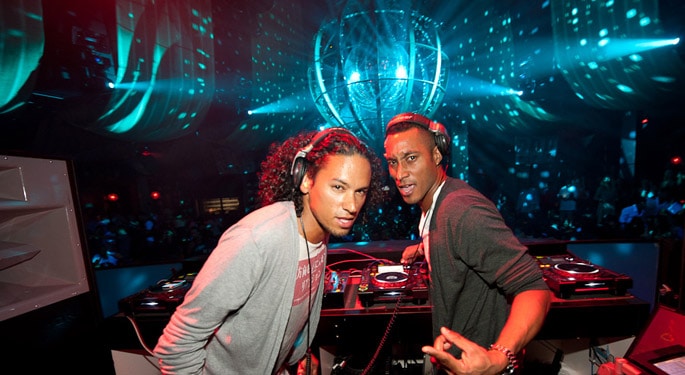 Last week I had the pleasure of attending a private Sirius XM BPM event with legendary DJs Armin van Burren and Sunnery James & Ryan Marciano in the swanky dimly lit PH-D nightclub on top of the Dream Hotel in downtown NYC.

Although, the Sirius XM event took place on the night of the NYC blizzard, the nightclub was packed (did I mention there was a blizzard outside with digits in the low 20s!?) with eager EDM fans getting down. Talk about dedicated, but it was also no surprise that it was packed with SJ&RM (Sunnery James & Ryan Marciano) and Armin van Burren throwing it down. Although at one point, it was uncertain if SJ&RM would actually make it to the venue in time due to their multiple flight delays and missed connections!

However, Sunnery James and Ryan Marciano did not disappoint and were able to perform their hour long set! After performing their set for a little over an hour, I got a chance to speak to both Sunnery and Ryan about their latest tracks, preparation for festival season, collaborating with Kanye West and what they have cooking next!

After talking about the crazy winter weather in New York City, we spoke a little bit about the BPM SiriusXM event.

SJ&RM: Since we began breaking through in America we got a lot of support from the SiriusXM guys, they really loved our sound and our style. In the beginning in Miami we met and they kept supporting us and they brought us a radio show almost three years ago. Our weekly Sexy by Nature radio show series and they play all of our songs. We have a great relationship, it's like home just like NYC. The radio show broadcasts in 26 countries now. It was a little scary in the beginning that we have to put out a radio show every week. But as soon as artists see we have a radio show they send us their music so we a lot of fresh music to air. So its fun creating a little sexy by nature theme.

EDMSauce: You guys are also performing at Tomorrowland yet again this year! How does it feel to performing in Belgium for another year?

SJ&RM: Yes! We are going to performing for 2 weekends on the Mainstage and we are going to be hosting our own Sexy by nature stage at Tomorrowland. It's a big achievement, really really happy about that!

EDMSauce: And how do you guys prepare for your sets for Tommorowland? Does a festival set differ from a club set?

SJ&RM: Last week, we were in LA performing at Exchange and we went to the studio after to prepare our sets. We don't know yet, we always want to feel off the crowd. Maybe start a little hard and go down – its up to the crowd. We just select the tracks and then see what happens. The venues doesn't really matter, we prepare the same way. But during festival sets we select tracks but we don't know the order we're going to play. We only have an hour to show ourselves so we prepare a little bit more. But during club shows we just go, we don't even think about it.

EDMSauce: And your latest song, ‘The One That Got Away' what inspired you to create that track?

SJ&RM: Actually, we wanted to make a song. When we first started playing in Amsterdam back in the days and getting big in Amsterdam we were playing a lot of tribal deep house sexy tribal beats like what Black Coffee is doing. And we decided to mix that sound which is something with what we were doing in the past and it has now the track more than half a million hits on Spotify in the last 4 weeks. It's going to really well.

EDMSauce: You released your track, ‘The One That Got Away’ off your own music label Sonos music, how did that idea come about? What led to that creation?

SJ&RM: We got so much music from younger producers or talent and we were like we need to release it. And a lot of labels feel like “it has to be like this…like that' and we were like ‘if it's a good track it's a good track and we want to release it' and now we can do that. We are the label boss now. We are creating a platform for creative dance artists, not trying to be or sound like someone else. If we can find an artists with a real nice sound and they break through that's a dream come true. Beccause lately within the last 4-5 years everyone was playing the same sound, and you can't really blame the artist because everyone was listening to that sound. But now, worldwide everyone is ready for more. Like you see house is coming back, techno, it's not going to be just mainstream. So it was the right moment for us to jump on a label.

EDMSauce: Now, this song is a little bit more “poppy” than some of your other tracks, do you see yourself creating more poppy tracks or experimenting with your sound?

SJ&RM: We want to make music. Our DJ sets are always eclectic, dance music wise and we felt like making a song with tribal beats and nice vocals and it worked. Maybe next song will be a little harder. We just want to make nice music, not just focusing on one type of sound. Its a mix between Black Coffee beats and R&B beats that we used to listen to when we were younger. People go wild when we play it as our last track during sets.

EDMSauce: There are a lot of DJs that are collaborating with artists, is there anyone in particular that you guys would love to collab with right now?

SJ&RM: Kayne West! He's one of the craziest guys out there but hes really uniqe music wise we can do something crazy. If you listen to his albums every album everytime it's totally different. He doesn't see any boundaries, he just goes in if he feels like. I think he's a genius music wise. I dk if he will be my best friend but in the studio we would make really good music.

EDMSauce: Any advice for others out there, looking to become Djs?

SJ&RM: The thing is identity, when we broke through in Amsterdam we had this unique tribal sound. Nobody was playing that back in the day. Poeple told us ‘play more electro' but we did what we wanted to do. As an artist you got to play what you like, you can'tnot copy anyone. Let artists inspire you but always be yourself and believe in yourself. It's the only way you can make it.

In this article:Armin Van Buuren, Sunnery James and Ryan Marciano

2019, a year to never forget. Those words hold a certain truth for both Armin van Buuren and Trance fans from all over the...