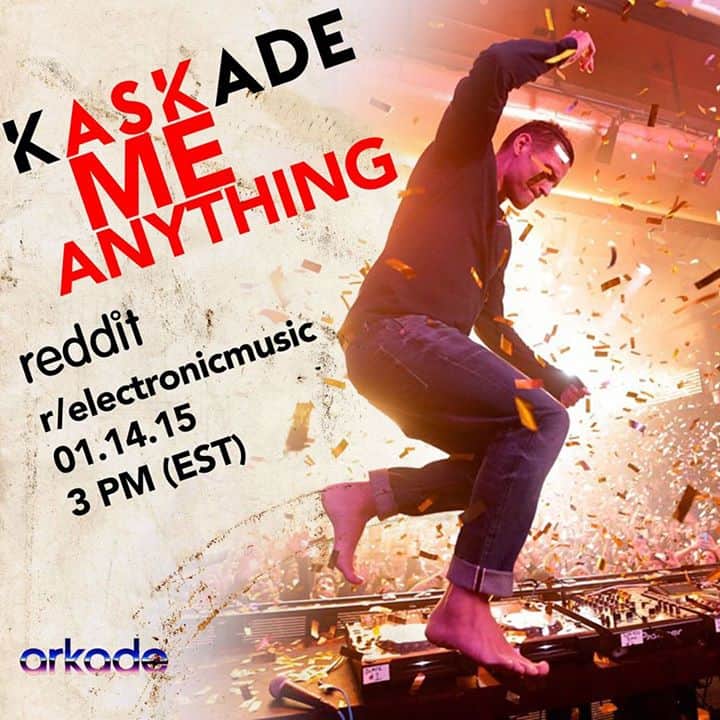 Ryan Raddon, otherwise known as Kaskade, conducted a Reddit AMA yesterday, joining the likes of Laidback Luke,  A-Trak, Eric Prydz, Knife Party and more in disclosing some of his upcoming EDM plans and his past successes in the wide-ranging Internet hub.

Answer: “Diplo is the man. I have a lot of respect for this guy for what he has been able to achieve and how he has been able to bring his sound to so many people. Pretty incredible. Not only that, he is cool and makes cool music. I think we respect each other so much because we were both here in this country slugging it out every week until people starting paying attention.”

2. He told us why he wears flip-flops.

Kaskade: “I started doing this for longer sets years ago… like why should I wear shoes when I am just standing up here bouncing around. It's not like I am walking through a forrest or something. So I started to pack sandals in my gig bag to my shows and took my shoes off and replaced them with sandals while performing. Then clubs saw this and started to put down carpet for me when I played… even better. Nothing better than doing what you love and having nothing on your feet. Freedom.”

3. Whether he is considering playing a Redux set at Coachella

Kaskade: “Not on the big stage but maybe I post up in the parking lot and work it out.”

4. He is always incredibly involved in the lyrics for his songs, regardless of whether or not he's the vocalist.

Kaskade: “I am VERY involved in the song writing on my albums. Typically I write or co – write a song then go and find someone to sing it. This is why my albums sound so different from what is out there in the EDM world. Albums are my stories and each song represents a chapter. But I have worked with some brilliant song writers over the years. Skylar Grey for example, she wrote the lyrics for Room For Happiness after we hung out in the studio and talked about a possible collab.”

5. His sets are heavily influenced by the feel of the crowd and has 2,000+ songs to each show

Kaskade: “I carry and [sic] SD card on it with about 2000 songs so I can go wherever I would like to go. But for BIG shows like that one in Denver I have the first few tracks sorted out in my mind. I will pull form a playlist that has about 30 tracks in it that I think will work that night and just go with it.”

6. Him signing with Warner Brothers won't affect the goals he had when creating his own label, Arkade

Kaskade: “I made Arkade to bring attention to young/new talent. To help give artists that I love an outlet to put music out. The deal that I made with Warner does not affect how I will go about running Arkade. If anything it gives my label more impact.”

7. If it were for him, Kaskade shows would be a mammoth 6+ hours long

Kaskade: “Ah man I would love to keep going at many of my shows. It is such a buzz kill when the cops show up or the venue notifies me that the show HAS TO END. Sometimes at the club shows they can fudge the closing time a little bit and that usually leads to something pretty memorable.”

8. He thinks EDM will continue to grow and evolve

Kaskade: “The Future of EDM…. hmmmmm. I think we will stop calling it EDM and it will continue to grow. Grow so much that we will not recognize it when it has fully matured. Not sure if that is a good thing or bad thing – guess it depends where you are standing.”

9. He thinks the involvement of major labels in EDM is terrifying because it compromises the music

Kaskade: “Yeah the major labels jumping into the EDM is really scary. I think a lot of what we are hearing right now is EDM manufactured in the lab. Electronic music was always so whimsical and free and some of that is getting lost with the machine trying to make a hit.

But I really think that Warner understand my goals and has promised to not interfere with my creative process – so far so good. they really believe in what I am doing. And I have to say that I think the time is right for people to hear and understand what is beneath eh surface or the pop edm – it's me.”

10. He has plans to tour the UK and will soon visit Los Angeles

11. The worst possible question you can ask him is whether he prefers cereal or a burrito

Kaskade: “Are you trying to kill me with this question?? smoke is coming out of my ears, there is no right answer”

12. He has the best name for a kitten

You can check out Kaskade's upcoming tour dates here. Listen to his latest track release, “A Little More” and a little more in his Soundcloud page: