Armin Van Buuren - Together (In a State Of Trance)
Advertisement 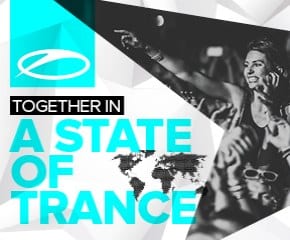 “The time has come, to join forces… in unity, friendship, and love. Together, in A State of Trance. This year’s A State of Trance anthem is now on the horizon, and tonight’s show gave a small taste of what the future holds. Join us as we come together for the greatest celebration on earth. It’s time to go back to the essence. Back to where it all started. That incredible feeling. Together in A State Of Trance.”

Armin Van Buuren starred the official anthem for the 700th episode of the State of Trance Radio Show on his latest episode. I personally love the intro of this song and I am hoping he will drop this tune live at White Wonderland for New Years' Eve. Armin has been experiencing with this tune live recently on his latest performances and more details on the release will be known shortly.

In this article:Armin Van Buuren, ASOT 700