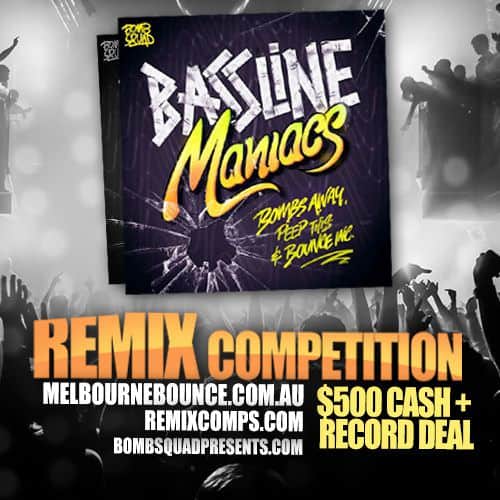 Bombs Away, an Australian House DJ duo recently announced their latest DJ remix competition for Bassline Maniacs. Teaming up with MelbourneBounce.com.au and RemixComps.com, one talented DJ will have their remix chosen as the winner of the remix competition and win $500 and have their winning remix released onto Bomb Squad Records! The winner will also have the chance to have their original remixes released on Bomb Squad Records!

Here are the rules as presented by Bombs Away on their Official Soundcloud page:

The 10 Submissions with the most ‘Hearts/Likes' will be considered the semi-finalists so REPOST from your page and share your submission around! The winning remix will be selected by The Artists, The Record Label A&R, and the content director of MelbourneBounce.com.au

All Genres may apply

Rules:
No purchase is necessary to enter or win this contest.

Remixes can't be uploaded outside of the Submission group at any time unless permission has been granted by BombSquad Records, link to the track once uploaded to the group can be shared and reposted, linked etc.

The remix stems can be downloaded from HERE or the ENTER COMP button. Hit REPOST on the introduction track before you download the stems. stereoload.com/bombsaway/basslin…remix-competition

Before you submit your completed remix, SHAZAM the song, and in your upload, mention if shazam picks it up as Bassline Maniacs or not. with [Shazam (yes)] or (no)

Completed remixes should be submitted back through the Soundcloud group for judging, HERE, using the ‘Upload to Group' Function
soundcloud.com/groups/bassline-maniacs-remix-competition-bomb-squad-records

Good luck to all!

In this article:Bombs Away, Remix competition

The music collaboration developer Splice has just acquired the remix competition and online music community Indaba. As Indaba has grown to be an online...

If the mid week slump has got you down then we are here to provide you with some fuel to finish out the day...