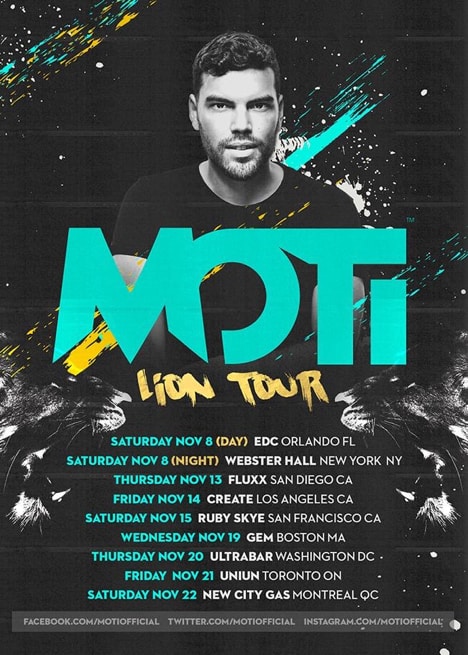 MOTi is one of the most talented and exciting producers around. Every track he makes sounds unique and different and he can make records in any style. 2015 is going to be all about MOTi. – Tiësto

With a year as smoldering-hot as MOTi’s, it’s easy to see how the Dutch standout and Tiësto protege has forged his way to the top of the electronic food chain. While power releases like Virus with Martin Garrix and Zeus displayed stamina, MOTi’s latest output Lion (In My Head) tantalizes. Lush vocals fill the air before Lion’s deep and bouncy, full-bodied, hooks and melodies swoop in attacking with fury and speed.

First off I'd like to say Congratulations on Lion, “Yeah thank you” welcome back to New York, last time you were here was Electric ZOO, right? “Yes, Yes, Yes” That was awesome, you did an incredible set by the way it awesome. You were awesome, you were great!

So how does it feel headlining your first tour?

Well Its pretty scary actually, the shows are going to be packed the tour is going to be amazing and its my first tour headlining so yeah its a little bit scary because you hope everything goes fine but at the same time its super exciting.

Yeah I bet, I bet, I've interviewed a lot of other people, they could be 20 years in the industry or just starting and up and coming and they still get excited and the jitters. (We pause due to all the background noise)

The interview was a little crazy, only because people were coming in and out the VIP room and the noises were loud and it was hard to hear each other  “A lot of noise here,” Yeah welcome to New York hahaha! You like it here in New York City? “I love it here, yea”

When your not making new music, do you listen to other types of music too? “Yeah well I listen to music all the time, yeah all kinds of music” Yeah so its like EAT, SLEEP, MUSIC, REPEAT? haha “Yeah, Yeah, Yeah, Yup, hahaha” (MOTi laughs)

And your new album is coming out, next year in 2015 correct?

Well yeah I hope so, Im still working on it, so we'll see what happens. Im not sure if Im planning to do a whole album, and I'm now focussing on singles. Lets see, Im sure if its the right time yet to do an album.

Any new collaborations on the horizon?

Oh A LOT! I still have to release my collab with Tiesto, I have a new one thats coming out next year. Umm I've got a collab coming out with Dzeko and Torres, I'm working with a lot of artists for new collaborations.

I love your collaboration with Martin Garrix, Virus that was incredible, I loved it! “Thank You” When I first heard it, I had to look it up on 1001tracklist because I was blown away by the massive sound. “Oh Thank You so much”

MOTi, if you could pick anyone in the world to do a collaboration with, alive or dead, preferably dead or both who would it be?

I would really like to work with W&W because they're good friends of mine, and they're great guys. I really love their music, and they're really trying to push boundaries in making music and trying new stuff every time so I really love it. And I think for them I would love to do something with them.

I love W&W I saw at EDC Vegas, Oh yeah you were just at EDC Orlando! How was that?! “Yeah, yeah it was great”

Hows the transition from EDC Orlando to a nightclub in NYC?

Its pretty good because I flew early yesterday so I had enough sleep, yeah today woke up really rested, and I was ready for it all day, so I went to EDC played my set, got on the plane came to New York, went to hotel changed, went out to dinner with my management and some friends and now Im here ready to go

Thats awesome, I have a few friends that are at EDC Orlando right now, I'm excited and happy for them, but I'm still living in my EDC Vegas zone, “Yeah EDC Vegas was amazing as well” It was very overwhelming but it was unbelievable. I Can't wait for next year!

If you could pick any other profession other than DJing and producing music what would it be?

“Umm, thats pretty hard, I don't know, I really don't know but I did study Clothing design it wasn’t me, in the end I ended up doing music of course. No I really don't know what I would do other than music. Probably would have done nothing just hanging around on the couch every day watching TV” Yeah and playing Call of Duty, “Yes probably somewhere I can be creative, that's most important for me and making music, yeah somewhere I can be creative.”

I love this, I love how music connects everybody, you of all people should know when your performing and you look up and you see all of those flags in the audience it must be liberating seeing that. “Yeah, yeah, defiantly” Its very overwhelming as a goer, you look around and you see all these people from different countries and all the decorations. “Yes its crazy” Its unbelievable I honestly love the music scene, I love how it brings everyone together, I love how you make awesome music, don't stop, don't ever stop making music this is only the beginning for you and don't be nervous about tonight either, it will turn into excitement, its a very vibey club here, I saw Alesso here a few days ago and you could see the expression on his face, it looked like he felt so comfortable. Your going do great tonight, are you going to play any new music in your set tonight?

Tonight? Im going to play a lot of new music, and I have a very special guest coming out tonight too

Alright I like surprises too, okay okay, alright. I alright I'll find out who it is.

After the interview was over I did find out who the special guest was, I had to act very calm when I found out who the special guest was. I go downstairs to go to the VIP section which was the stage, I saw the end of Tyler Sherritt set which was awesome, he did a great Job warming up the crowd before MOTi entered the stage. MOTi started off with an explosive introduction to his set. An hour goes by and I'm enjoying my time and then the #4 DJ in the world walks by me with his entourage of gorgeous girls following him. Thats right Tiesto was the special guest, my jaw dropped to the floor. He comes out on stage, and I can see everyone’s reaction to Tiesto’s appearance, everyone is screaming and their phones are out taking pictures. I say myself wow is that how I look when a special guest appears on stage. The entire night MOTi and Tiesto tearing up Webster Hall with their new collab, some of MOTi’s songs and some of Tiesto’s songs. I couldn't believe that I was standing behind one of the greatest DJs of all times. Tiesto was only out for 40 mins but it was incredible, after MOTi was finished were all clapping and cheering for him, he turns around and he recognizes me and I have my hands up for him and said to him, “you killed it, you did an amazing job!” MOTi smiles.

I can not wait till MOTi returns to New York City to bring us more incredible music and surprises.