Music with Beauty and Brains : An Interview with Mako
Advertisement 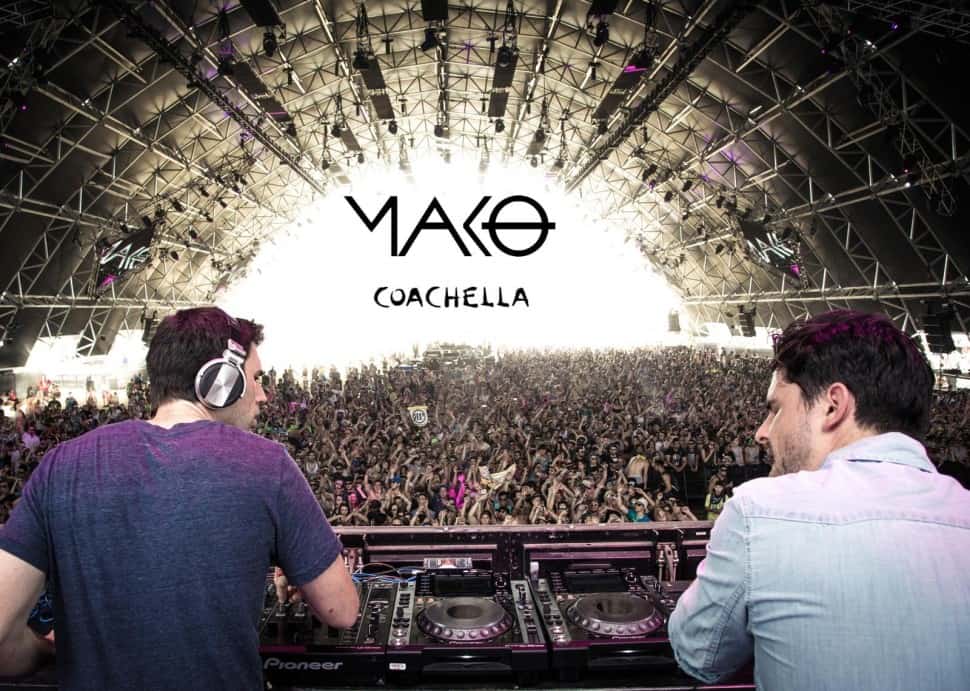 Duo Logan Light and Alex Seaver are one of those producer pairings that seem like it was always meant to be. Technically they knew each other before ‘they' even existed – their fathers were college roommates. They were born, and would grow up, states apart – but both obsessed with music. Alex would head to Juilliard as an accomplished french horn player, Logan would head to UMichigan, and then later become a (solo) DJ. It wasn't until the two met in their 20s, that the pair would realize that they could make amazing music together.

Hilariously, their first big success as a duo came from an underwear campaign.
Alex: I was writing film scores initially, and I had this failed track for a Fox Sports spot. My friend heard it and put it up for another campaign, and it was selected. It turned out to be the Fruit of the Loom.
Me: Did you get any free underwear out of that?
Alex & Logan: No! Isn't that b.s.?!”

Despite the relative newness of Mako (they've really only been on the scene as a duo since 2013), they have collaborated with some insanely popular DJs – Sander van Doorn and Avicii, for example. I asked how they felt about co-producing in general.
Alex: Well there's really three important aspects of producing a track with someone else. One, how much equity do you have (how much of the earnings is your share)? Two, how much do you actually contribute? You can work on a track and do 90% of the work and get 10% of the money. Three, how much credit do you get for it? Ghost producing, you get 0 credit. Others, it's a jointly shared song. Being so new and not having millions of fans, getting credit is really important because it gives you validation. For us, being asked to collaborate with someone so well known gives a huge boost of confidence. I mean obviously Avicii can collaborate with any DJ on earth, so for him to select us really meant a lot.
Logan: So far we've noticed that there are lots of DJs who can make sick beats and not many who can write amazing songs. There's a huge demand for songwriting and vocals right now.

Being in demand for songwriting and actual composition doesn't suck. The Mako sound itself is still evolving – both Logan and Alex feel strongly that their progressive electro tracks should stay melodic with vocals, but don't commit to sticking with one genre.
Logan: You know, we don't have that huge and long established audience like someone whose been in the game for 10 years or more. We could take things any direction we want, whatever we want to make.
Alex: It's very freeing. Artistically, I think, if I couldn't do that… it means a lot to me to be able to make music that I like and that I care about.

I asked if they thought about who they would pick, ideally, for their next collaboration.
Logan: Some vocals Alex sang himself so – I want someone who can sing. (laughs)
Alex: You know, if I could work with anyone I'd just want to work with someone really different, someone who is totally on another page than us, whose ideas are wild. I don't want to work with people just because of their name.

Right now the pair are focused on finishing an album for release next year, as well as heading out to tour in South America and then doing a US tour in early 2015. The tour will be the first for Alex, who has never been our tour before. Logan, in his life as a solo DJ, was frequently on the road.
Me: So how is it going, are you acclimating to life on stage ‘DJing?'
Alex: Oh God. On stage I can only make mistakes, basically.
Logan: We just played Coachella, and we were on stage, the crowd is going insane. There's this moment right during the build, right before the drop… and Alex's elbow accidentally hits the wrong button.
Alex: Dead silence, man.
Logan: For about five seconds. And the crowd is like “what happened?”
Alex: I was shaking. Of course this would happen to me.
Logan: Later I was walking around and fans were like, that part where they delayed the drop was so epic! So, you know, it's fine.
Alex: Seriously though, the rest of the set I was freaked out.

They both are cracking up while telling this story, and Alex is so animated that I can't help but join in. Poor guy – his first big gig, and he nearly blows it. I love how real and genuine they are. What about other gigs, any other close calls?
Alex: We recently played at Hakkasan, and our dad's both came to that show and hung out. Our grandparents even were there! To be honest though, they weren't huge fans [of electronic music].

To wrap up the interview, I ask them to describe how each of them contributes to the overall track.
Logan: Alex knows how to make everything pretty. He understands music so well, it's just crazy the things he can come up with.
Alex: Logan is smart. Also he's been here, done that, and has experience to bring everything together.

You can check out these awesome guys on the Mako Facebook and find out about upcoming gigs. We also love the video of them making the latest Mako track, “Our Story” which is the end of summer festival anthem that every DJ is playing-

Every year, the largest esport on the planet, League of Legends, does what no other sports organization does: it enlists major artists to compose...

Not too long, EDMSauce had the pleasure of reviewing Mako's track, “Breathe“, a track filled with a soothing soulful melody and emotive vocals. Since...

Los Angeles act Mako are back at it this week with a new track for Ultra Music. Now just based around producer and songwriter...