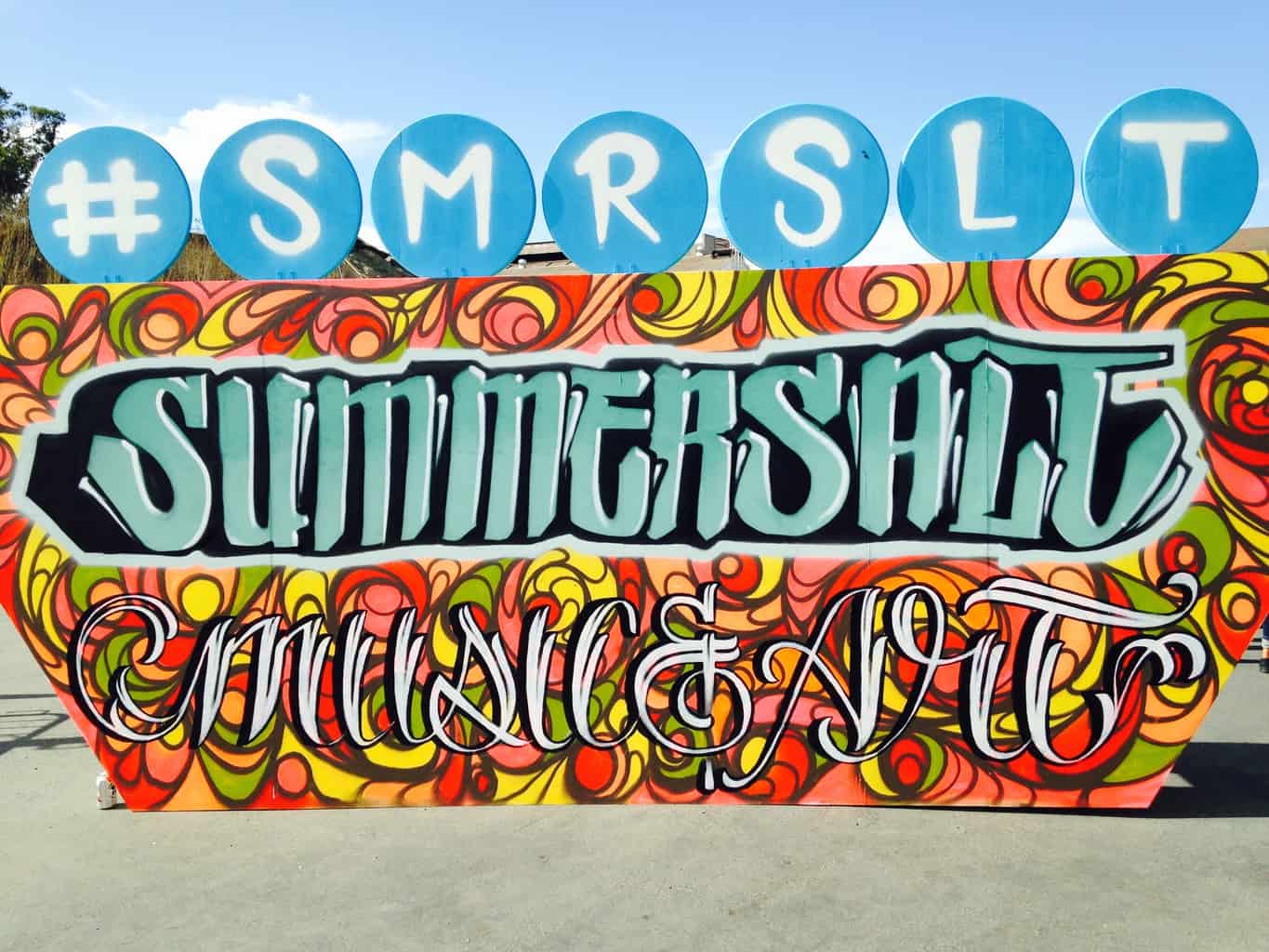 The sun shining, the bay sparkling, beats bouncing off the walls inside a nearby warehouse: pretty awesome for a third year festival produced by a small, San Francisco-based company. On September 13, I attended Summersalt, a one-day EDM-clad festival boasting stars such as Big Gigantic, Keys N Krates, G-Eazy, and more. Taking place on Pier 70 next door an abandoned warehouse, Summersalt was an extremely fun, laid back event with amazing music, great food, and funtivities.

When we first walked down the concrete ramp and arrived at the rustic looking venue, we immediately heard some trap beats booming from the small stage to our left. There weren’t a lot of people there yet, so we decided to check out Panic City & Miles Medina. It was my first time seeing both Dim Mak artist Panic City and San Francisco-native Miles Medina, but they did a great Job starting the day. Other than a few sound problems, their set was solid, chock-full of hits such as Disclosure’s “When a Fire Starts to Burn,” Flux Pavilion’s “Bass Cannon,” and Diplo’s “Revolution.”

As Panic City & Miles Medina ended, we moved over to the other, slightly larger stage (there were only two) to catch the beginning of Amp Live. Before the event, I researched and got to know Amp Live’s tracks, and was excited to see him live. One half of Zion I, Amp Live is an electronic Producer/DJ focused mostly on alternative hip and hop with a rap inspiration. And he did not disappoint. With a live electric celloist on stage, his set ranged from everything from “Soldier Boy” to a remix of the Beatles “Come Together.” Bitter sweet, I had to leave early to interview the boys from Keys N Krates in the nextdoor warehouse. (If you haven’t had a chance, ready my interview here.)

Coming out of the interview, we walked out right at the tail end of Grandtheft. From what I saw, the Canadian producer hyped up the crowd with favorites like Calvin Harris’s “Summer” and Flume’s “You and Me” Disclosure Remix, and some of his own tunes like “Gimme More” and “Keep it 100” which was produced with buddies Keys N Krates.

Next up, the Keys N Krates trio set up their instruments and prepared to rock Summersalt. With their new EP on the verge of being released (dropped last week on September 19th), the electronic band was more than excited to perform for the rapidly growing crowd. No matter how many times I see Keys N Krates, they never cease to amaze me. You can see their passion for music and performing in their faces, and watching them perform is hypnotizing. Their set consisted of last year’s hits “Treat Me Right” and “Dum Dee Dum” (which the crowd went WILD for), and remixes of greats such as “Clique” and throwback “Bittersweet Symphony.”

After Keys N Krates, we wandered over to the smaller stage to see The Gaslamp Killer. And wow. I must admit, I have never seen The Gaslamp Killer live or really listened to a lot of his music, but I am now a fan. He is a WILD MAN on stage. I have never seen anyone perform with such energy and animation. His body moved with every beat, wub, and drop; he WAS the music. His kind of spooky, dub sound was amazingly unique, but he also mixed in the perfect amount of samples from other artists: Hudson Mohawke, Flume, and Kendrick Lamar.

There was one more set left. I looked over at the larger stage to see San Francisco rapper G-Eazy ending his set and hoards of people leaving, which was surprising since Big Gigantic was still left to play. After 20 minutes or so of setting up and and sound tests, duo Dominic and Jeremy took the stage, saxophone and all. I had the pleasure of seeing Big Gigantic play 2 years ago at another small San Francisco set, but I was very impressed with their Summersalt set. I am always amazed with live instrumentation during sets, and these two just kill it on stage. Between the mind-blowing saxophone, incredible drums, and amazing choice of set list, their performance was more than I could of asked for. From their original tracks (“Sky High” and “It’s Goin Down) to other electronic hits (“Jaguar” by What So Not and “Bonfire” by Knife Party), I was surprised and delighted by every song that blasted through the speakers. Big Gigantic was the perfect way to end the day.

Venue:
An abandoned warehouse?! Yes, please! There was plenty of space and a great atmosphere. There should definitely be more events here.
9 out of 10.

Lineup:
The lineup is always great for such a young production company. Every year they have secured top-notch artists (Dillon Francis, Zedd, Diplo, just to name a few), not excluding this year.
7 out of 10.

Amenities:
Available, delicious food (5-6 food trucks), more than enough bathrooms, and never more than a 5 minute wait for drinks. Plus there were fun non-music things like graffiti artists and blow up rollie-balls.
8 out of 10.

All and all, Summersalt is a great event. I love the mix of artists and the inclusion of up and coming local artists. I will continue to go every year Summersalt (and Wintersalt!) is taking place, and recommend it to all SF locals. It is low-key, fun, and a great way to spend a Saturday.