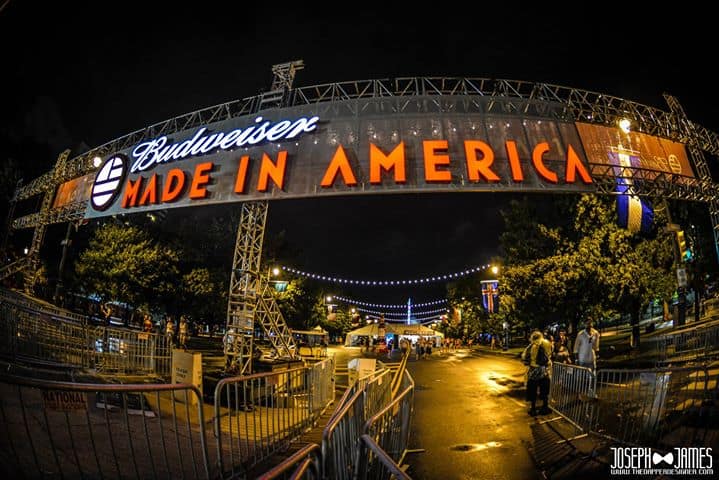 Labor Day weekend is inevitably packed with massive festivals, incredible music, and questionable weather. Fans gather across the country to celebrate art & sound, and to mourn the end of the season. Last weekend marked the third annual Made in America festival at Philadelphia’s Ben Franklin Parkway. Our experience was mixed – highs and lows of amazing food, a high energy crowd, terrible weather, and great music. Edmsauce.com sent two people to the festival – photographer Joseph and editor Ben. We lived the experience and share our perspective below.

Ben: Overall…. Despite having the festival temporarily suspended due to inclement weather, festival organizers were quick to adapt, re-adjust, and acclimatize.
Joseph: I have been to this festival since its inception, and this has been the best year to date. Yes, the rain did put a temporary delay on some sets but it did not stop the crowd from enjoying this incredible festival.

Headliners at Made in America Festival included Kanye West, Steve Aoki, Kings of Leon, and Tiesto. Water stations, cooling areas, and places to sit were strategically and effectively provided for general admission, VIP, and staff.

Ben: Organization was excellent. It didn't matter if you were at the festival with a VIP pass, GA ticket, press credentials or artist access, everything was organized exactly as it should have been. Accommodating tens-of-thousands of people isn't an easy task, but Made in America came through to perfection.
Joseph: Between EMS, state and local police officers, and an alcohol enforcement task force, this was one of the safest festivals I have been to so far. You could not walk more than 15 feet without being able to find help if it was needed. Between all the different law enforcement agencies present and EMS driving around mobile care units, it made people feel alot more safe.

Our Saturday at MIA was fantastic and was what every fest raider dreams of a memory of what festivals should be: the vibe was pungently benevolent, the crowd never skipped a harmonic beat, and the music flowed seamlessly from stage-to-stage. The day was highlighted by acts including DJ Cassidy on the Liberty Stage, The National on the Rocky Stage, R3hab & Baauer on the Freedom Stage, and OCD: Moosh & Twist on the Skate Park Stage. The lack of overlapping sets was impressive and the crowd managed a healthy flow of bodies between areas. The night ended with the voice of Kanye “Yeezus” West echoing through Philadelphia; not a cloud on the horizon.

Ben: My favorite moment of the weekend was watching the residents of Philadelphia work together through horrific weather, be happy, and stay dry(ish). Even though the music stopped, that feeling of festival unity prevailed through the mess.
Joseph: It is tough to chose a favorite moment I had during the festival. The combination of all the different genres and artists that played made for one of the most memorable festivals of the summer. If I had to chose one moment that stood out it was Girl Talk's set. At the time I was standing under an overhang due to the excessive amount of rain and couldnt Make Up my mind if I wanted to go see the set and endure the storm. I crossed security, walked into the photo pit and what I saw was simply amazing. Thousands of fans dancing, singing, and partying with not a care in the world. Every last person in that crowd was soaked but the atmosphere was so vibrant that no one seemed to noticed it was pouring. It was my favorite moment of not just this years' MIA Festival, but my favorite moment of all three years so far.

The weather held out until Sunday. When it started raining, it was immediate chaos – the Benjamin Franklin Parkway was quickly transformed into a messy, muddy, massive mosh pit. At 6:00 p.m., the festival was shut down due to severe thunderstorms. Bummer.

Ben: We hiked through the streets and into a nearby parking garage. There were groups of Made in America refuges already posted up near the cars.
Joseph: The rain happened so fast it was a free for all to find shelter. I ran out of the festival and down two blocks to a hotel overhang to wait it out. There was at least 50 of us under this overhang trying to get dry and wait it out.

Up in New York, fest raiders at Electric Zoo were having a similar experience. However, The Made in America staff worked cooperatively with the city to get the festival restarted. Set times were revised and the music continued long into the night – despite the continuing rain.

Ben: Tommy Trash, Pharrell Williams, and Girl Talk performed relentlessly through the downpour. The crowd was still partying hard. It was brilliant.
Joseph: There was something special about each set that was performed after the festival opened back up. I believe it was a chance for the artist to see how much the fans wanted to be there and the amount of love each fan had for the music. Whatever it may have been, each artist that performed in the rain to the crowd of thousands, gave it just a little extra in their set. Almost as if saying “thank you for staying and sticking this out together with me”

“If you live on the east coast, and you like music, you should be here.” -Destructo, after a rain-soaked set

Tiesto and Kings of Leon brought the festival to a close late Sunday night, and one-by-one, festival-goers crawled back to their respective homes.

Ben: There’s a specific formula that creates the perfect event; the music, people, and environment have to be on point, and in key with each other. Made in America totally hit the mark.
Joseph: With new music festivals popping up faster and faster these days it is really hard to determine which one to buy tickets to. Made In America is unique and it offers something that I just have not found yet at any other festival. The combination of such different artists and range of musical styles allows it to capture something that other festivals fall short of. That being said, Made In America is one festival that I will continue to come back to every year.

Advertisement. Scroll to continue reading.
In this article:budweiser, Made In America, MIAfestival, Philadelphia

With the rise of genres like Bass House and Riddim, it seems that the sub-genre of Trap which once reigned king side by side...

An Alien Touched Down in Philadelphia Last Friday

If you're even slightly apart of the electronic dance music community right now, there's a good chance you have probably heard the name Rezz....

House is a way of life. If you are within the house scene, you know the special relationship that fans have with their four on...