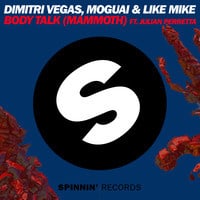 Dimitri Vegas, MOGUAI, and Like Mike have put up the radio version of Mammoth called, ‘Body Talk (Mammoth)' feat. Julian Perretta on Soundcloud. The track will be available via Beatport on Spinnin' Records September 1st. With the massive success of ‘Mammoth', it was only a matter of time before they found someone to put vocals on the track. English singer-songwriter, Julian Perretta was the chosen one for the track. It's always a toss up on any given track as to which version people prefer, the original/instrumental mix or the vocal edit. What do you think? Original mix or Vocal edit?

In this article:Dimitri Vegas, Julian Perretta, Like Mike, Moguai