How It's Made: Electric Daisy Carnival Las Vegas
Advertisement 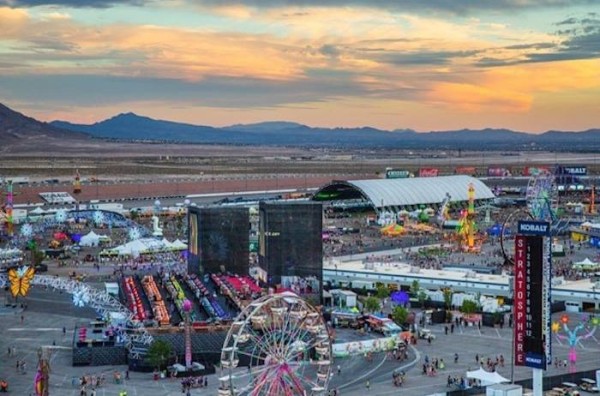 It takes about 20 days to build the world of EDC in Las Vegas; close to 100,000 man hours. There're a lot of ups and downs in the construction process, and a lot that goes unnoticed during the festival. EDM Sauce got a chance to uncover some of the mysteries and trade secrets used in this year's edition of EDC Las Vegas.

As technology changes, production has to constantly update. Companies, such as AG Light & Sound and SJ Lighting are tasked with bringing the freshest, most innovative experience to festival guests. They're consistently challenged with making sure the environment always exceeds expectations.

Setting up EDC in Las Vegas poses a few unique obstacles for production crews; the most obvious being heat. In the beginning of June, the Las Vegas desert heats up to 110 degrees during the day. It would be unfair to construction crews to work in conditions like that, so instead, they work at night. Festival goers get to visit EDC from 7pm – 6am, and so do the men and women who build the festival.

Working through the night poses additional challenges. It's much easier for someone to get hurt in the dark, so everyone in the Las Vegas Speedway is required to wear a reflective safety vest. Festival attendees have the privilege of seeing EDC constantly illuminated by thousands of high-powered lights; but what about the people setting up the lights? There's a massive amount of equipment needed to build EDC that is never used during the festival; including overhead lighting, heavy machinery, and safety utilities.

Having to overcome extraordinary situations to complete production on an event like EDC is just part of the Job. There is a certain appeal to being contracted to an event of this magnitude. Corporate events and hotel conferences just aren't as much fun. The best part of working EDC is getting to push the equipment's capabilities. There is no “too much”. EDC expects the biggest, brightest, loudest, fastest, tallest everything.

This is a unique opportunity for production companies to move outside the box. This can also be an incredible challenge; stretching the the physical limitations of the gear into a product that's new and innovative.

AG is among the industry leaders in stage building, lighting construction, and video design. They're contracted for America's largest festivals including EDC, Coachella, and Ultra. In 2013, AG built Ultra's Megastructure: Home of “A State of Trance 600”, “Space Ibiza”, and “Carl Cox & Friends”. To watch the evolution of construction is like watching a painter work a canvas but on a massive scale:

Setting up the world of EDC is a challenge; but maintaining it takes pro. Most festival guests don't realize what's going on at EDC each day after they leave. Fighting through the Las Vegas heat; from sunrise to when gates open, production crews are working to make each and every night at EDC a different experience. For example; the Circuit Grounds (the largest tent area, similar to Ultra's Megastructure), had it's entire lighting and video programming overhauled each day.

It's the small tweaks that prevent fans from getting bored. This is what sets EDC apart from other festivals: Having an entirely new experience each night under the electric sky.

60 different lighting and video specialists were assigned to the Circuit Grounds.

The entire video rig over the audience in the circuit grounds was able to move up and down from the roof; almost touching the crowd. The largest video pod contained 141 individual pieces and weighed 3,900 lb. To ensure safety, there were 8-1 ton hoists used to support the screen (able to support up to 12,000lb).

The megastructure featured over 1,000 hanging lights and about 7,600 sq ft of video (almost a quarter-acre).

There were 24 riggers assigned to the roof construction of the Circuit Grounds. They worked specifically on the structure's ceiling for 3 weeks; that's 3,000+ man hours.

Altogether, roughly 500-600 people were involved in the festival build.

Overall, EDC Las Vegas is one of the most effectively organized festivals in the country.

Specifically, the use of what's called a site operation team, or site ops for short, makes EDC particularly effective at getting the job done. Site ops helps to Monitor boneyard, logistics, and heavy equipment (such as forklifts and golf carts). Having a system in place to track the use and availability of important construction tools helps get EDC up and running.

Insomniac knows who gets what, and where it goes. There aren't many festivals in the world that can touch EDC's expertise. A healthy combination of innovation and familiarity keep EDC and companies like AG as the industries' best.