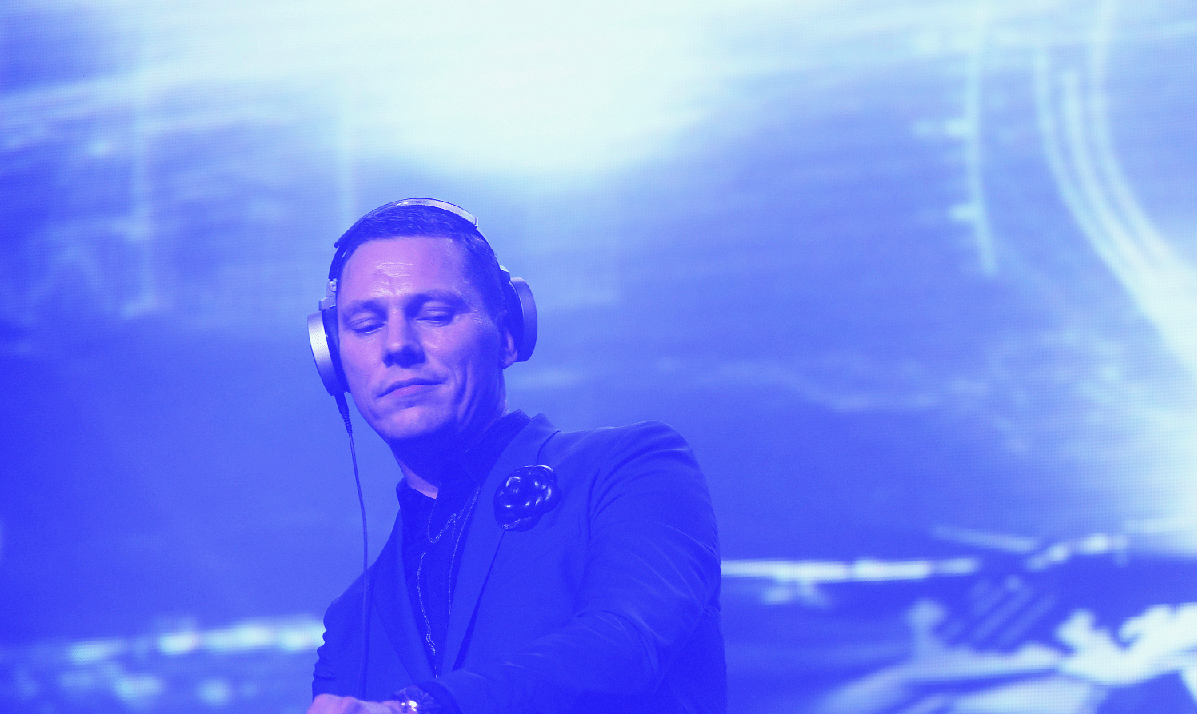 This past Tuesday, the world's most legendary DJ held his album release party at Terminal 5 in New York City. Tiesto's ‘A Town Called Paradise' has been in the works for years now and upon release…the reviews were mixed. Media outlets said that it was predictable, not original, and called it a money grab. Two of us from EDMSAUCE (Elle and Erik) were there to hear the set in person, and our thoughts on it will probably surprise you.

Erik: I got into dance music mainly through Tiesto‘s classic trance albums ‘Just Be' and ‘Elements of Life', so needless to say I was surprised and a little disappointed when he started to take a different direction with his music. This direction continued to go farther and farther away – until it was totally unrecognizable as the artist I'd once known. So, while I originally thought many of the songs of ‘A Town Called Paradise' were catchy, I was all in all kind of unimpressed.
Elle: I have always been a huge fan of Tiesto. I think he's one of the most talented artists on the scene, and he has been at the top for so long now. I agree he's gone in a different direction as the tastes of the crowd has changed, but I think that was more his development as an artist, experimenting with sound.

Terminal 5 was decked out to the nines. 7-up was sponsoring the event so green was the primary color of decoration throughout the venue. Signs were everywhere reminding you that you were now in ‘Paradise POP 2800'. It was a cool idea to transform the venue into an escape. Later in the night Tiesto would be sure to complete this illusion. At 8pm, Brazilian rising star Danny Avila took to the decks. The 19 year old producer/DJ spun an hour and a half set of intense big room bangers. There was definitely no shortage of energy on his end. As his set wrapped up the venue was now packed. At 930 sharp Tiesto came out in full purple and black tux. For close to the next three hours Tiesto took the crowd on a journey to Paradise and back complete with special guests and live vocals as well as some other surprises.
Elle: I loved the tux. It sort of reminded me of Nightmare Before Christmas, but in a good way.

Throughout his set different vocalists came out to sing live to the songs they were featured in on the album. Quilla came out to perform ‘Close to Me' as well as her smash hit with Sultan & Ned Shepard ‘Walls'. ‘Walls' was definitely unexpected the pushed the crowd into excited chaos. Shortly after, ‘Red Lights' was played out, and to our (and everyone else's) surprise, the crowd lit up with Red and White Lights. Previously, as everyone entered the venues, LED wristbands were handed out by staff. These wristbands clearly lit up but there were no buttons or switches to activate them. Many people were puzzled but kept them on and soon forgot about them. Well when ‘Red Lights' started everyone realized exactly what the wristbands were there for…
Erik: I have to admit this was really cool. Very visually striking.

The wonderfully inescapable Matthew Koma took the stage for both ‘Written in Reverse' and ‘Wasted' and the crowd responded with electric enthusiasm. Hardwell showed up fresh from his appearance in Times Square to play out a few of their collabs together as well. Tiesto finished up his special appearances and then, started to really get into mixing live. We could easily see his technical skill and prowess from the upper deck of T5 where we were standing.
Erik: When he played ‘Adagio for Strings,' I had this epiphany. Until then I'd been enjoying things but seeing the crowd reaction to Adagio… well it can only be described as total euphoria. It was very nostalgic for me.
Elle: Were you teary eyed? I was kinda teary eyed.

Ultimately, Tiesto has successfully changed with the times, something that not nearly enough credit is given for. While yes many artists continue to stay in their genre with total success, it takes a lot of confidence and talent to explore outside your comfort zone. If you look across the sea of electronic artists, in fact, there are actually very few risk takers – yet Tiesto has been pushing the envelope and changing it up since he released ‘Kaleidoscope‘ in 2009. Being a chameleon, and being successful, can bring with it a lot of haters. Including, sometimes, ‘music experts' like us.
Erik: Guilty.
Elle: That performance to me showed that Tiesto is one of the masters of bringing people together. I would say it is in my top 5 of shows I've ever seen. I'm stoked for him to take it on the road – I know people will love it.
Erik: I think ‘A Town Called Paradise' is special, it brought together a group of 3000 people acting as one, dancing and singing along to both Icona Pop and Adagio for Strings indiscriminately. Tiesto hit it out of the park with this album and this concert, for so many more reasons other than production quality and originality.

Favorite moment of the night?
Elle: I forgot Earplugs stupidly, and the very nice lady next to me gave me a pair. She was quite a bit older, so I asked what she was doing there. Turns out, this is Quilla's mom (her dad was nearby snapping photos). They'd flown all the way to NYC to see their daughter perform onstage with Tiesto. It was just such a proud moment for them. It reminded me of why I got into this blogging thing in the first place – to find and showcase new talent. And Quilla's performance was so great – her face was pure joy. Loved that.
Erik: Man I have to choose just one? Well definitely when the bracelets clicked on and crowds reaction to it was awesome, but hearing the original edits of songs like ‘Escape Me', ‘Feel It In My Bones' and ‘Adagio for Strings' was special as well. It has been years since I heard the original tracks lives and definitely put a cherry on top for the entire night.