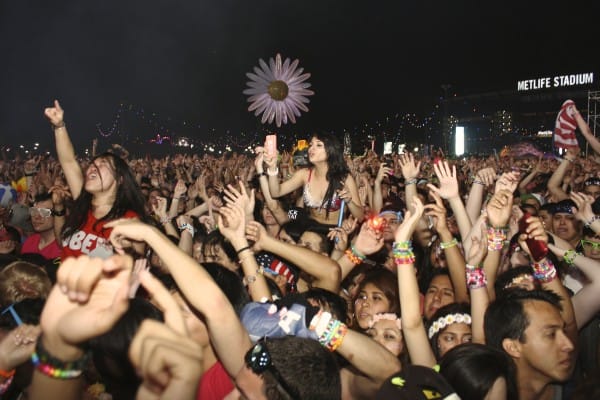 Last weekend, fans from near and far gathered together under an electric sky to celebrate a weekend full of both novel and familiar music, to begin new friendships, and to experience live performances from skilled dancers and acrobats. The Electric Daisy Carnival was held at the MetLife Stadium in East Rutherford, New Jersey, where more than 50,000 exhilarated fans congregated per day. The crowd was an array of colors. Girls were dressed in bright tutus and shorts, decorated with flowers, and were sparkling with Glitter. Many guys wore festive animal masks, Neon tanks, and Indian headdresses. From the moment I stepped on the train that would take everyone to the festival grounds, I could feel the energy in the air. Everyone on the train was chanting, shouting, and clapping. People were coming together, discussing which sets they were most excited to see.

The weather on Saturday was not the best, but that didn't stop dedicated fans from missing out on the experience. The skies opened up around 4:00pm and thousands of people continued to go wild to the music in the pouring rain until EDC staff members shut down stages for about an hour. However, the weather on Sunday could not have been more perfect. At a balmy 80 degrees, ravers were ready to soak up the sun rays and dance their hearts out.

Here are some of the craziest sets from the weekend!

Sunnery James & Ryan Marciano took the CircuitGrounds Stage at 6:30. The duo played a full set of house music, and even dropped a new remix of Alesso's ‘Under Control'. They are seasoned performers with previous appearances at Ultra and Amsterdam Music Festival. Sunnery James and Ryan Marciano will be playing at EDC Las Vegas in late June.

Rudimental also had a very memorable set. Although Rudimental was one of the only live bands performing at EDC, the British group captivated an audience full of people swaying to the beat and holding their hands up high. Their remixes and originals were a hit, and Rudimental have stated in interviews that they are writing and recording new song ideas while on the road in preparation for their second album.

Another memorable set was Destructo's performance at the CosmicMeadow stage. Destructo played a couple unreleased tracks as well as many crowd favorites including ‘Get Up' by Bingo Players and Fedde Le Grand, Sultan, and Ned Shepard's big room hit ‘No Good'. Destructo's decks were decorated with pineapples, a signature fruit that can be found on his twitter page as well.

Krewella had one of the most energetic performances of the night. The set was complete with a ton of wild hair flipping and impressive live vocals by the two sisters Yasmine and Jahan. The sisters' voices were always on key and meshed perfectly in their hit songs ‘Alive' and ‘Come and Get It', proving they are just as good singers as they are performers.

Thomas Gold spun an extremely diverse and unpredictable set. He created a feeling of contrast by changing gears, going from high bpm songs to slower selections. Some favorites from the set were ‘Smile' by Galantis (Marco V Remix) and ‘Amen' by Merk & Kremont. Thomas Gold will be touring this summer in Prague, Portugal, and Praia do Alerro.

Bassnectar was the headliner on Saturday night at the CosmicMeadow Stage. He rocked a crowd full of bass heads with his dub heavy set. Massive speakers pounded out a sound so heavy that even in the crowd, I could feel the bass replacing my heartbeat in my chest. Some brain-melting tracks that Bassnectar played include his remix of Primu's ‘Here Come The Bastards”, his original ‘You & Me' ft. W. Darling, and ‘What' a collab with Jansten.

Sander Van Doorn opened his set with “Gold Skies”, a song that has become incredibly popular immediately after its release.
Before his set, I had the opportunity to interview Sander Van Doorn backstage.

EDM Sauce: How much of EDM is a business and how much of it is music, since you run a very successful label and have also faced great success as a producer?

Sander Van Doorn: “Edm has two sides to it, the whole creative side and the whole side of selling the product. There is a whole marketing side behind it. The whole industry blew up about 3 or 4 years ago and obviously when blowing it up it becomes more commercial in some ways. The whole club-ey underground scene has really helped it at the same time. So as long as that is kept into balance then it's going to work out.”

EDM Sauce: What inspires you to write fresh new tracks?

Sander Van Doorn: “Usually I just like listening to a lot of music and actually the younger generation is producing a lot of new great tracks these days, and combining it with the background I've had with about 35 years of music, a lot of rock bands, and just for me personally going into the studio and trying completely different things out every single time usually works best.”

EDM Sauce: what do you consider to be your greatest success?

Sander Van Doorn: “It might actually be ‘Gold Skies' the new track together with Martin Garrix and DVBBS. The responses on that track are absolutely insane so we are looking forward to seeing how that is going to work out. Besides that starting from scratch and just building it up every year more and more and more and for the next years to come that's like the biggest element for me.”

Steve Angello's set was full of progressive house bangers, he mixed many popular tracks including ‘Nobody to Love' (Third Party Remix) by Sigma, ‘Foot Steps' by Arias & Cerrone, ‘Strong' by Arno Cost & Norman Doray, and ‘Payback' by Dimitri Vangelis & Wyman. Towards the end of his set, Steve Angello spun one of his own tracks, ‘Slvr', a collab with Matisse and Sadko. He closed his performance with ‘New Wave' by Rashad Evans.

Calvin Harris began his set with ‘Under Control', a collab with Alesso ft. Hurts. The highlights of his performance were his originals, ‘Bounce', ‘Feel So Close', and ‘Flashback'. Any one in the front row could see the focus in his eyes as he preformed. Calvin Harris' song selection couldn't have been better. He elegantly mixed his originals with throwbacks and remixes. Calvin Harris pumped up the crowd by screaming in between songs, urging fans to throw their hands up and get crazy. He closed his mind-blowing set with his newest hit, ‘Summer'. Huge canons shot tons of confetti into the air, and fireworks burst in the night sky. Goosebumps were scattered across the crowd as thousands of fans sang the lyrics to ‘Summer' as the set closed, confetti still raining down from the electric sky. Calvin Harris had arguably the best set at EDC New York.

EDC NY 2014 kicked off the summer for thousands of people with New Music, new friendships, and good vibes. If you missed out on EDC NY, don't worry because there are still many other opportunities to see many of your favorite artists at other Insomniac events!

Hope to see you all again in a year at the next New York Electric Daisy Carnival!

(all pictures were taken by the EDM Sauce Team)

Advertisement. Scroll to continue reading.
In this article:EDC, EDC NY