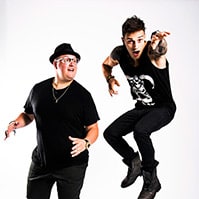 Hey everyone, thanks for tuning into another episode this week. I present a new duo project from David A. and DJ TB1, who call themselves, 1DAFUL. Here's a little more information on them:

David Audet and Adam Greenberg, better known as TB1 and David A, have recently decided to ditch their individuals personas and do the damn thing to become something greater than the sum of it’s parts, and that thing, is 1DAFUL. Made up of ½ hype inducing front man/Dj TB1 and ½ master of the decks, producer extraordinaire David A. There is no doubt that 1DAFUL is something the EDM world has yet to see. Some friends get together for lunch, some friends play golf, or if you’re anything like 1DAFUL, then some friends make party music together as well.

Their friendship is one based on having fun, making music, and getting parties going. In 2010, the duo started out by working hand-in-hand to create several remixes of popular songs. They then took their eccentric style and parlayed that into their own catchy, original tracks. Now, the two will be producing, touring, and raging together 24/7 as the duo now known as 1DAFUL.