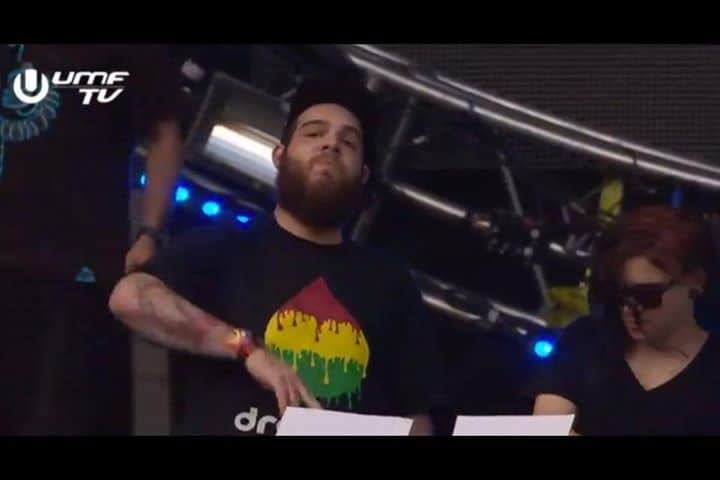 Just who is TrollPhace? TrollPhace was quite the unknown artist until Skrillex name dropped him during his Reddit AMA (Ask Me Anything). During the AMA Skrillex was asked who he had his eye on in which he replied, “For people who are into the harder “dubbbbZZZsTEppZZYYY BosSTEPZ” sounds.. im really fuckn’ with these kids right now! Super unknown but SO raw.” You may recognize him from the screenshot below which captures him on stage with Skrillex during Ultra Music Festival.

Read his story below:

“If you know me you had to know that this big ass post was inevitable… So grab a beer, pack your bong, clean your Glasses and get ready for a feel trip.

This past week at WMC was the most surreal intense single experience of my life. There are hours of stories but what I think is important is how I transformed not only as a musician, but more so how I've transformed into a different person. What I've realized and come to terms with are revelations I may or may not have deserved, but I would like to share it with you.

I would be lying if I said there wasn't a single moment of time in my life where I didn't jump on the Skrillex hater bandwagon. I'm man enough to admit that I was dead wrong about not only Sonny, but just about every major person in this industry. I used to listen to his music and even play out, but like a fucking coward I let the negativity and insecurities of the people around me morph me into a very bitter and jaded person. Who else can raise their hand and say they are a jealous hater because it was the “cool” thing to do. I know a lot of you could.

It's with deep regret and a heavy heart that I have to be real and say that was me. I know now that was my own insecurities being projected onto a man that did not deserve it, and it wasn't just him.

Sonny and his very NOBLE family at OWSLA have done way way way more than grabbed me from the pits of Hell I was sitting at, they gave me a whole new lease on life.”

“Unknown to most of you my journey here was not easy. I starved for years, I wrote songs in my car while I was homeless. I've been back stabbed and I've beefed with people that tried desperately to snuff me out because of pure jealousy and the occasional misunderstanding, and it breaks my heart to say that if they had just worked as hard on themselves as people and their project, they would be leaps and bounds beyond me because I'm nothing special. And I'm just as foolish as I am “extraordinary”.

I have a pretty cliche sob story full of years of struggle and being alone. I too like most of you started at 1 Like and no followers. And while many say I'm lucky this stuff is happening for me, I disagree. Because the luck is being pointed in the wrong direction. I was lucky to have the support of every single person that was here before I was recognize for what I do. Without that rock and with out you guys, I would have never been able to over come the cards that life has dealt out for me. And that's where I'm lucky.

Like most people I come from a broken home, an addict cheating lying coward of a “father”, and like most was bullied my whole life for being different. I've been the victim of unreal circumstances and even have a condition that should have me on disability but none of that matters because I found my place after 25 years of being a black sheep and alone. And that place is here.

The support this scene has shown me has pushed me to reach for the stars and over come adversity, as well as become a person I can be proud to look into a mirror and stare at.

So that being said I want to inspire you to over come your own demons. I want you to take life by the balls and really go for it. You wanna be a doctor? Lawyer? Rock star? World Champion underwater basket weaver? Then get off your ass and do it, and don't ever ever ever stop. No matter how poor, no matter how tired, no matter how impossible it seems, if you put your time in you will reap the benefits even if your family sits there trying to tell you not too. I've said it before, doubt will kill more dreams than failure ever will. If time is money, and you are investing in what you believe in, remember that you will always get what pay for.

This time 2 years ago, I had no Job, no money, the girl of my dreams dipped and I had a gun in my mouth. And with the kind words, support, and interaction with my fans, people in this community, and artists – I put the gun down and decided to see how far I could take the last thing I had to live for and see how far I could take it. I never wanted money, or fame. I just wanted to help people work through their own misery with my music. Think of is as like a hug from me to you via audio.

And all that crap I went through did make me jaded, but Sonny and his family pulled me out of that rut and made me realize that all the trials and tribulations I've been through with my life did nothing but prepare me to actually appreciate and be humble and grateful for what I've been able to do and to live a life that most aren't fortunate to be able too.

This last week with that crew was full of hugs, goose bumps, tears and happiness and I will never forget it. So I encourage you to set out for yourself and make your dreams become a reality because take my word for it, you definitely can. I don't know wtf music theory really is, I suck at mix downs and I can't really write a melody off the top of my head, but goddammit I know how to make noises and I used that and did the best I could, which I all anyone could ask of me, or you could ask of yourself.

I'm proud of the sound the people around me were gracious enough to let me jump in and be a part of. And I'm proud to say that we accomplished something grand together.

Fuck me and what this new world that's opened up for me is gonna do for me… Let this be a breath of fresh air for everyone that's aspiring to become something they want to be. Every up and comer out there no matter what industry should see now that if they have a dream it doesn't have to be brought down because of how impossible it seems.

But the greatest part for me about all this, is after all that time being unaccepted by most, I was able to be myself, and I'll never forget the moment Sonny looked me in the eyes and said “Always do you, no matter who likes it. Don't change you, don't change your sound.”

Ever wonder what kinda people those big guys up there are? They are the kinda people that even tho they didn't need to, were always making sure I was sorted an taken care of. I learned so much it's overwhelming and felt like I was a part of something revolutionary.

I'm pretty sure the look on my face on that stage says it all as everything I just told you I've been through just sorta lifted off my chest and I soaked in what I was working for but never expected. And I hope that my story can help you make it through your story as well, because as I said, you can do it.

I love each and every one of you. I'll never forget where I come from and I will never stop being real with you, because along with Sonny and OWSLA, you all have changed my life and I hope to return the favor.

My name is Damon, and it was a pleasure getting this far with those of you who have tirelessly helped me make it happen, now let's see what else we can do together, because I'm not in this alone.”