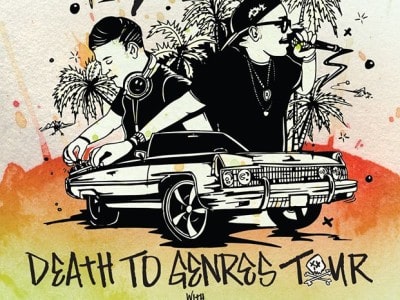 Matthew Van Toth and Julio Mejia aka the guys who make up GTA are not easy to track down. When they are not touring Europe with the likes of Rihanna, they are traveling to all corners of the globe putting ‘death to genres.' Luckily in between tour stops and world domination they sat down with us to discuss a little bit of everything; video games, their meteoric rise to fame this past year, as well as how they design some of the most unique sounds to date.

We spend a lot of time trying to get our mixdowns to sound as best as they can. Some of our newer tracks have a lot of stuff like Latin percussion and synths that we need to spend extra time on to get it to sound right.

GTA prides themselves on being individuals during a time where many aspects of EDM are starting to be repetitive and monotonous. The name of their most recent US tour, ‘Death to Genres', makes it clear that they do not believe in limiting themselves to only one specific sound. They go with their gut and are not afraid to experiment with whatever they feel like exploring at the time.

We aren't afraid to try whatever we feel is cool. People tend to let something that influences the majority, box them into playing/making a certain kind of style of music. We just want to have fun with the idea that music has endless possibilities and keeping an open mind on different styles of music is the best way to enjoy music in general!

GTA jointly agree that deciding not to abide by the rules of a certain genre has given them an opportunity to grow with the constantly changing EDM culture. As once a certain sound has run its course, its associated genre goes through a period of neglect as many of its DJs decide to broaden their horizons. GTA avoided this issue tactfully by incorporating many elements of sound design into their work creating tracks which completely defy any genre stereotype.

Whenever “that” sound gets “over saturated” people tend to stop listening. I also think genres have a time limit in some sort of weird way. Once that genre has had its time, then the DJs that play that specific kind of music are pretty much stuck in that until they decide to move on and find something else to play.

Van Toth and JWLS of GTA met online. In a day and age when anyone can pose as anybody over the internet it seems amazing two incredible musical talents could find each other. The two were introduced via a common friend, so the risk of being catfished diminished greatly. Once the two met in person and hit the studio together there was instant chemistry.

Hahaha! We actually met on Facebook through a mutual friend, so no, catfish didn't really cross our minds! We just kept in contact through AIM and Facebook and eventually met up and tried making music together, and it just clicked!

The duo's first major tour experience was when they were invited along by Rihanna as the opening act for her most recent European tour. Talk about ‘trial by fire'… GTA were tasked with warming up stadiums full of eager and excited fans. By all accounts they succeed with tremendous success. They said hanging out with the ‘We Found Love' vocalist was quite the experience. When asked if the rumors about her supposed tight bond with Mary Jane were true, they had to smile.

It definitely is 😉 She's super cool and we'd love to hang out with her again sometime!

It is rare to have been on the scene for a short time and have the amount of experience that GTA have acquired. Having toured both Europe and America, among many other locals in the same twelve months is a whirlwind experience. Of course all artists have their favorite spots to stop. While GTA loved touring both abroad and in America equally they noticed some interesting differences.

Well we loved South Africa and Australia! They were so beautiful, and the crowds were insane! The major difference between European and US Crowds is the kind of tracks they're both into. Both places are so differently musically, and we also feel like Europe has even more differences musically in itself! Some tracks will go off in some cities in Europe where in other cities they wouldn't at all, but that all has to do with reading the crowd and getting the vibe right.

On top of touring the globe, GTA have a resume of studio experience that would make anyone in the EDM world green with envy. The pair have collaborated with the likes of A-trak, Diplo, Crookers, and Kaskade. On top of their collaborations, they have had a ton of high profile remixes that have been endorsed by the likes of Afrojack and Tiesto. When asked if they have ever been star struck yet in the studio, the pair could agree easily on one name… and with his recent work with some legendary robots, it's obvious why.

Definitely Pharrell! We got to sit in the studio with him and watch him work and tossed some ideas around. He's one of our biggest inspirations and it’s always has been one of our dreams to meet and/or work with a legend like him! Shoutout to Skateboard P.

So when you share an acronym with one of the most successful video game franchises ever, there is bound to be some confusion. While GTA actually did not get their name from Grand Theft Auto, they are still avid fans of the series. Everyone needs a little escape from reality from time to time, especially when real life gets a little to stressful; the guys prefer GTA V as their digital getaway.

Hmm, We'd probably say GTA V, my online character. He's so rich and has a lot of nice cars!

GTA have had an absolutely legendary year in terms of commercial success. The best part of it all, is that it seems to just be the beginning. The two have some seriously epic plans coming up for the remainder of 2014. So make sure to check their Facebook and Twitter regularly for any information regarding their new album.

We're working on an album for 2014! So tons and tons of New Music, and definitely a lot more tour dates around the world! Keep an eye on our Facebook and twitter!

In this article:Death to Genres, GTA, interview