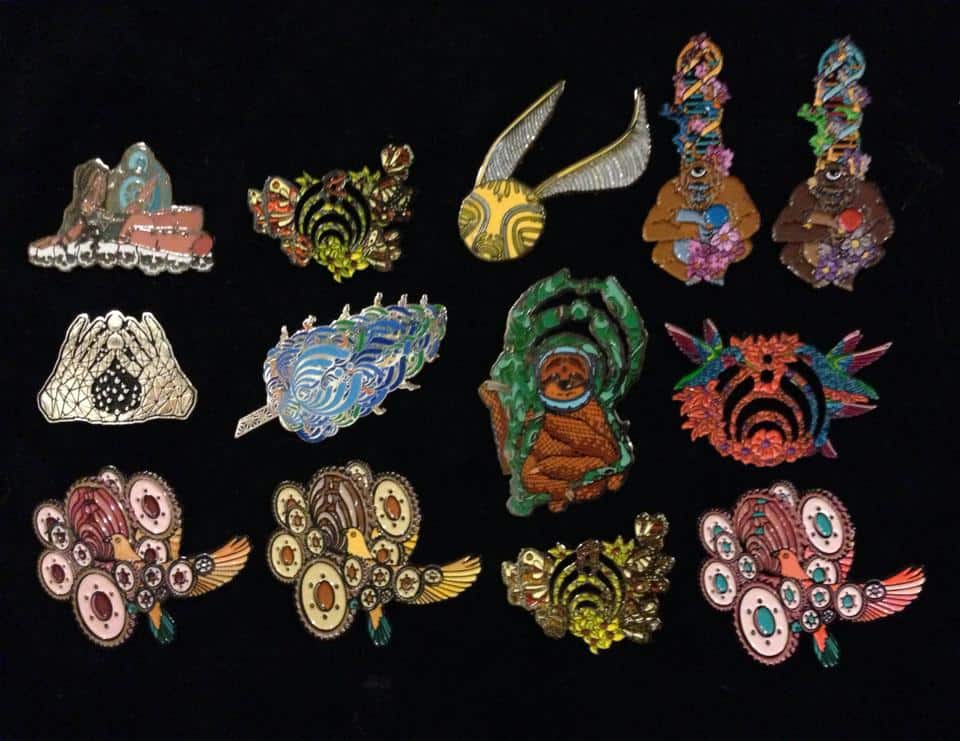 A common sight seen at any festival is the presence of hats, notably Grassroots California, doted with pins of all kinds of designs, ranging from the common, to the exceedingly rare. Just a little time ago, in the “secret” Facebook group Bassnectar Market Place, an auction concluded with the final bid being a whopping $1011. The Auction began at $20 and included 13 pins. The pins are as follows from top right across then down; Voodoo, Nectar Party 1.0, Golden Bass Snitch, Bass Totem3 v2,  Bass Totem3 v1, Diamond Cutter, Nugnectar Blue Dream (silver), Basslothstranaut, Nectar Party 2.0, Birdnectgear (all 3 variants), and Nectar Party 1.0 misprint.

All of these pins are sought after, with the Diamond Cutter and Nugnectar being exceptionally high in demand. Nugnectar was designed and produced Matt Zarlingo and Smiling on a Cloudy Day but the rest of the pieces in the original offering were designed by Alex Hull, aka Lex Newtho.

A peculiarity of pin and art auctions in this area of the web is that the auctioneer often adds items to the winning bidders' loot, making for a perfect atmosphere for bidding wars and more awesome payouts. This in turn reinforces the strength of the community and ensures people continue to auction and purchase the art.  By the end of the auction, there were over 400 comments on the thread and the winnings included 37 pins, 30 prints (of which several were one of a kind), 10 stickers and 3 shirts. You can check out a gallery of some of the items included at the link here.

It makes me delighted to see that these collectibles are gaining traction in the EDM community and this auction is a milestone in my opinion. Not only does it show that these pieces of art are increasing in demand, but it proves that people are willing to put up the big bucks for Bassnectar and the pretty pennies for Pretty Lights. While the majority of such auction groups are “secret” and thus require an invite, it's not difficult to get in once you have a buddy on the inside. Stay tuned for more posts on the pin world and it's interesting traits.