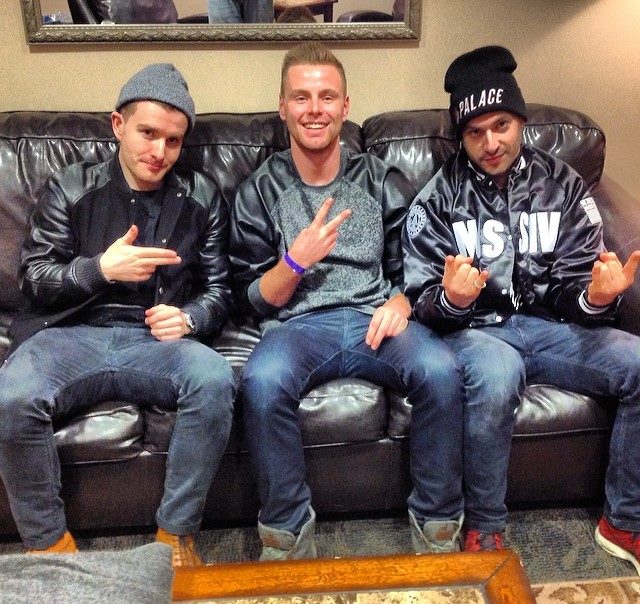 Last weekend I had the opportunity to catch up with Beni G. and Plus One, the infamous duo that is Jack Beats. I met up with the guys before their set at the legendary Fox Theater in Oakland, opening along with GTA, for Skrillex as part of the Bay Area takeover week.
To be hand selected by Sonny to open at anyone of these shows that took place in this magical week was truly a special treat. Artists that played along with Sonny included such acts as; Seven Lions, Claude vonStroke, and A$AP Rocky to name a few. As Jack Beats have really established a name with OWSLA it was beyond fitting for them to be a part of this supporting cast.

“Any show with Sonny is truly incredible, and to be able to come into the Bay Area and play this show for him is fucking amazing!” – Beni G.

“As we came into the venue (Fox Theater) it just became more and more, WOW…” – Plus One

Beni G. and Plus One had a pretty calm 2013, they did play massive sets at EDC and Day of the Dead here in the states, but stayed pretty under the radar for the year. They guys did put out Jack Beats remixed Vol . 1 & 2 but as far as production was concerned a relatively calm output. About a week ago Jack Beats fans worldwide got some excited News about an album compilation series called “Fabric Live”. Fabric Night Club is located in and London constantly ranks at the top as one of the best clubs in the world. For Beni G. and Plus One it has truly been home away from home, and a melting pot of all scratch masters. We are all beyond excited to hear what this mix has in store for us!

“It is just a little bit of summing up what we are into at the moment, especially when we are in the states we do a lot of festivals and play high energy sets and that is really cool. We are predominately a house music act really and that has always been the main focus. (This mix) is a little bit more back to that.” – Plus One

Fabric means so much to the guys that have even been quoted saying, “Fabric is our Studio 54.”

“It really was a melting pot for all Dj’s and artist in the scene, and we all just used to roll back there. No matter where you were playing in England you would just end up at Fabric at 5 in the morning. Even if you weren’t playing at Fabric that night you would know everyone at the door staff, and you would even just got there for a drink, like a casual after work thing.” – Beni G.

The guys even hosted their own night at Fabric recently sharing the stage with Foreign Beggers, UZ, and Congo Rock. With a lineup like that sharing one stage, you get the feel on how much this place means to them.

“It was really cool, we a do a party there every couple of years. It’s always pretty special!” – Plus One

This last year in music sadly it has seemed like the focus as steered away from quality of the arts, and more into who is the biggest diva in the scene. We have seen Rob Swire and Feed Me “supposedly” quit music for a period of time, countless twitter battles that make Dj’s look like 5 year olds and even the Godfather of dubstep “Benga” choose love over this music. Beni G. and Plus One have not only achieved profound success with Jack Beats, but had long already established themselves as true taste makers in the scene before the duo even came together. Fellow artists in dance music should really take notes from these two on how to maintain a professional level and still deliver top notch music on every level.

“We sort of quietly observe everything that goes on, and always stick to our own type of tick really. We never get involved in anything besides the music that we really want to do.” Beni G.

“I think we have not always really intently, and certaintly not on a personal level got involved with anything. We always stay on the fringe of certain music. Like we might play a few trap records but never dive into it. I think a lot of people debate whether we are even a house act, because we make weird house music, because that’s kind of helpful man. I think like anything creative, as long as you love doing it and never really diceit. Compared to if your deep in a scene I can only imagine (You are stamped –Me). Yeah! Especially these days fuck, you get five minute of fame” -Plus One

“In 2 seconds you can be on top of the bills and then yeah… We kind of just like being in our own zone, whether it is a huge crowd or alone in our studio we just like our own vibe.” –Beni G.

Just hearing the word “studio” from the guys got me pumped! In a recent Facebook post the guys joked about some secret studio missions to LA after the Skrillex show in Oakland. During their set I was completely surprised when they played, “Whats up Suckaz” but this post put my confusion to rest.

Maybe we can expect a new genre of music, Fidget House and Melbourne Bounce = Fidget Bounce!? The guys funny enough are being notorious for never being on time for releases and honestly hate hyping up new tracks.

“I really don’t like the whole, “Oh we have some great news!” (laughing) I fucking hate that shit, if you have some news fucking tell us!” Beni G.

“I’ll put the rumors to rest no, Lady Gaga collabs! You did mention social media and we have a collab with Kill The Noise we have been doing for over a year, and it’s still not got drums ! (Exploding Laughter) – Beni G & Plus One

So I guess we can expect that track before EDC 2019!

After the interview I did not want to be backstage for their set but with the crowd and get the true Jack Beats experience. The guys did not disappoint delivering a massive house set, playing every classic Jack Beats track you could imagine. From Get Down, to their Day Dreamer remix I was lost in a fidget house paradise.

A big thank you to Beni G. and Plus One! Constantly delivering something new to music and staying away from the hype. These guys are true role models for me in the Music Industry and I expect huge things from these two in 2014!