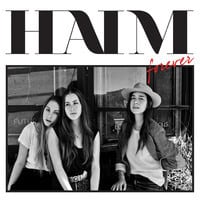 The 73 year old legendary disco producer, and Daft Punk Collaborator, Giorgio Moroder has remixed HAIM's single ‘Forever'. 2013 has truly been a breakout year for HAIM, from the release of their debut album ‘Days are Gone' to touring around the World, performing at the biggest festivals, and recently performing on SNL. So whats next? How about a remix by Giorgio Moroder? The Giorgio Moroder remix brings an upbeat, dance-disco sound to an already fantastic pop song. Moroder's signature vocoder can be heard throughout which really sets it off giving it an even bigger sound. Definitely a track worth listening to. Check it out below via HAIM's SoundCloud page.

In this article:Giorgio Moroder, HAIM

One of the biggest weekends in music is here as Coachella gets into day 2 of Coachella 2018. For the eighth year in-a-row, Coachella...

Giorgio Moroder is one of the most influential people in the history of dance music. The producer helped start the electronic music movement in...

Glastonbury, a music festival that needs no introduction, has just released the official 2017 lineup. Organizers of Glastonbury confirm that “twice as many” bands...