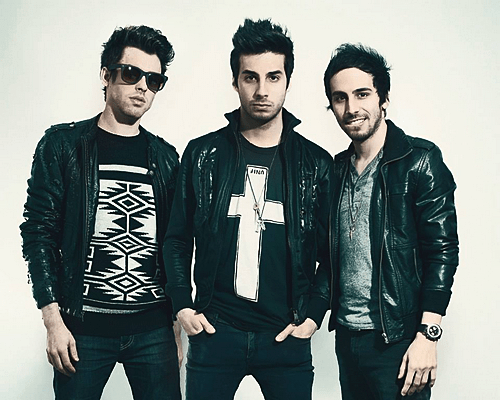 Last night at the sold out Pier of Fear event in NYC, we had to opportunity to catch up with Cash Cash on a variety of things. Check it out!

EDM Sauce: I understand Jean and Sam started as a rock band, what made you guys move towards EDM?

Cash Cash: I think for us it was slow evolution, because we were always remixing and producing for other artists and doing outside production and even production for ourselves, we produced Krewella's new single “Live For The Night,” and it made for a slow transition. We started to get rid of our instruments to be producers, and it was great cause it was at a time when producers are like becoming artists, and they're just intertwined as one and it just all came together for us.

Cash Cash: If I had to name one, as cliche as it is there's no doubt in my mind that it would just be Daft Punk.

EDM Sauce: A lot of EDM artists tend to explore different sub-genres. What do you think of the growing EDM scene and all the new sub-genres?

Cash Cash: Sub-genres are cool because in a scene where things can get stale really quick if your not too careful, it really just opens up a lot of different doors. We have this new asian style on this one song “Satellites,” on our new EP and I think you gotta change it up where people listen to the song and think what is this. We kind of did it with our new song overtime too, like I noticed a lot of the soundcloud comments were asking about the different genres. That's what you want, you want people to be thinking what the fuck is this. Then you get all these sub-genres and weird hybrid shit pushing the bar.

EDM Sauce: Which tracks did you have the most fun producing and why?

Cash Cash: For us I think “Kiss The Sky,” it was really fun and different from anything we have done. On outside tracks I'd say “Live For The Night” was really cool, because it was a different approach and usually when we are recording music we have someone in the studio working with us, but with the Krewella song they stuck with the vocals and we were going back and forth through skype and cell phones, and just playing stuff for each other through cell phones. It was a new approach for us and it was cool, just a totally new dynamic.

EDM Sauce: Is it ever tough working together as a group to produce music?

Cash Cash: Well my younger brother is in the group, so were always fucking knocking each others teeth out, but were a really good dynamic. My brother and I are like the Oasis brothers always going at it, and Sam is like the neutral one and brings a sense of being rational when we are being irrational.

EDM Sauce: Is there any fresh News you want the fans to hear?

Cash Cash: Were just working on a bunch of new songs right now, we are gonna be out in LA working with this girl Christina Perry on a song, which I am really excited about. Possibly might be doing a Dillon Francis collab, and just tons of New Music.