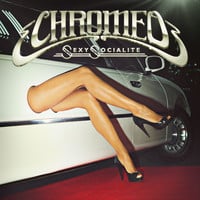 Chromeo is an electro-funk/pop group out of Canada. Last month they hung “White Women”, their 2013 full length follow up to their 2010 third studio album “Business Casual.” Now, they've released a new single with an interesting sound, absolutely killer bassline, and lyrics that have been stuck in my head since I first listened to it with classic artwork to match. “Sexy Socialite” is the song that is building up this hype, and will even be performed on Jimmy Fallon October 29.

The special surprise? They will be accompanied by a mystery special guest! They're mum on who is joining them, but the single being played on the show alone is enough to get me to tune in. Till it's on the air, you can hear it on Soundcloud and download the song on iTunes the day it premiers on T.V.