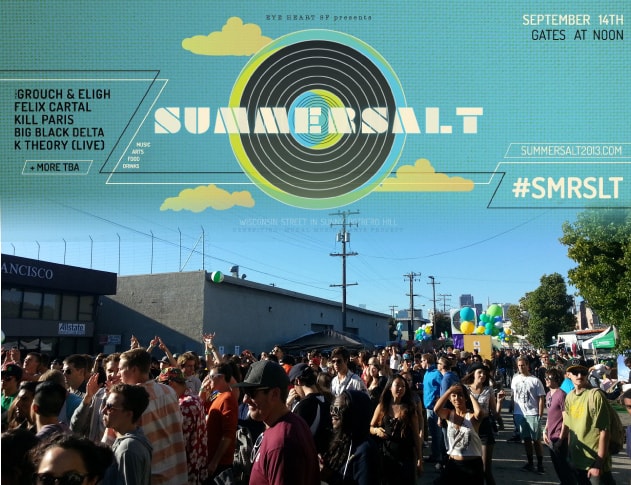 It’s been 3 years since the first Summersalt in SF at Fort Mason debuted. On September 14th, 2013, Eye Heart SF in conjunction with CrowdTilt brought back Summersalt to Portrero Hill as a street block party. With headliners like The Grouch and Eligh, Kill Paris, Felix Cartal, Big Black Delta, K Theory and Midi Matilda, Summersalt SF proved to the fans that this party should be back year after year. The producers of Summersalt present San Francisco festival go-ers with two stages, the main stage provided by the Red Bull Tour Bus and Thee Parkside Stage presented by SF Weekly and a dynamic lineup of artists ranging from Hip Hop to EDM. In conjunction with the musical acts, live painters, art vendors, and interactive games enhanced the overall vibe and enthusiasm of the street block party.

Nate Mezmer is one of the producers of Summersalt and founders of Eye Heart SF. Although he was busy coordinating the event and making sure the to-do’s were on track, I caught up with for a quick interview at the bar behind the Red Bull Tour Bus Main Stage.

1.It’s been 3 years since the first Summersalt in SF at Fort Mason. Why put on the show now in 2013?

Since Summersalt debuted in Oct 2010 we have always wanted to do it again. It was such a fun and unique experience that people seemed to be asking us about it all the time — “When are you gonna do Summersalt again?” — and so we knew there was a demand for it. In 2011, it just wasn’t possible for several reasons and in 2012 we opted to put on Wintersalt instead before our big NYE party at Fort Mason. In 2013 the stars sort of aligned and the successful CrowdTilt campaign ensured that Summersalt was back!

2. Why did you decide to hold Summersalt at Portrero Hill? Why make it a block party?

We chose Portrero Hill for several reasons but one was the fabulous weather during September. In general the area is almost always a few degrees warmer than anywhere else in the city. We chose to do it block party style because obviously it was on a street. Also day-time events seem to have a better, more joyous energy and they are also more manageable. Overall, we wanted to be able to bring people out of their comfort zone a little bit and expose them to something special in a great area of the city. We were also able to raise some money for the “Mural Music & Arts program” which works with students at nearby International Studies Academy in Portrero Hill.

We wanted to stick to what we had done with both Summersalt and Wintersalt which was select a variety of indie, electronic, and hip hop that fit well together. It makes for a more well-rounded musical experience but also it draws a more unique and fun group of people together. Showcasing The Grouch and Eligh on the same stage as Kill Paris, Felix Cartal, Big Black Delta, K Theory and Midi Matilda on a sunny Saturday afternoon in the middle of the city is what Summersalt is all about.

4. What’s something about Eye Heart SF people might not know about?

We have a T-shirt shop on Union Street! We have an amazing direct to garment printer and can virtually make any tee shirt idea you can think of. We were only going to do a pop-up shop for three months but then decided to stay longer term. With the custom printing it allows us to not only make cool shirts for people but we can make designs for our events on the fly. Stop by sometime, 1980 Union and Buchanan.

5. What’s the best thing about throwing and producing events?

Building something from the ground up- It’s one thing to throw a party but it’s a whole different animal to create and build a brand. We knew Summersalt was special but it’s no small undertaking to build a festival brand from scratch. It’s also not cheap! With Summersalt and Wintersalt we have literally put our own blood, sweat, tears, and our own money on the line in efforts to build something bigger than ourselves. Seeing the crowd at Summersalt this year have such a great time, all the smiles and dancing, our friends and family being there, knowing that it was a success in terms of people’s experience and it also made some money and raised some money as well… That’s what it’s all about.

6. A friend said you graduated from UC Davis. Ever think about reaching out to Davis and producing a show here?

I actually started throwing events in Davis in 2002. I was sorta bored and was doing a lot of hip hop music and so I decide to throw a hip hop show at the Davis Indoor Sports Center. We actually had Live hip hop acts upstairs and house DJs spinning downstairs outside (during the summer). Ever since then I just kept doing shows, events, and parties. When I moved back to the Bay to SF in 2006 there was really no other thought in my mind but to continue promoting and producing events. In terms of doing something in Davis its possible! Maybe I should talk to Red Bull about it… If you have any ideas let me know. Maybe we travel the Summersalt up there!?

Christopher King, also known as Festiva, is an upcoming Bay Area DJ taking San Francisco by the storm. Having recently been featured as a guest DJ at Electric Daisy Carnival in New York as part of the Discovery Project, Festiva has been booking various shows at clubs, festivals, and gigs. Festiva is a personal friend, so it was great catching up with him for a quick interview about his set at Summersalt. To keep up with his shows, visit his website.

1. Festiva-You’ve recently played at numerous festivals and clubs including Vessel, Audio Discotech, DNA Lounge, EDC New York, and now Summersalt SF! How does it feel to be playing at numerous venues? How was Summersalt?

It feels great! To be honest, I did not expect to be playing to many high level gigs and I could not be more grateful. EDC New York was the most exciting experience; I was surprised to see the crowd be so into the deeper techno grooves with all of the high energy genres that are popular at the moment. Summersalt was great! It is always a pleasure to perform with other great acts here in San Francisco and the location and weather could not have been much better for Summersalt.

2. What is your inspiration for producing music?

Any style that can get me lost deep into a groove while also evolving throughout are what inspire me at the moment. I’ve always been attracted to music that can make me lose sense of time and make me feel like where I am at the moment is all that exists. That is the type of feeling I try to portray in my own productions and DJ sets.

3. If you could collaborate with any other DJ or artist, who would they be and why?

I would surely like to collaborate with Pleasurekraft eventually. They’re deep, but ever evolving grooves have really played a huge part in influencing my style. Every production they release is the highest in quality and it would be an honor to work with a duo such as Pleasurekraft.

4. How did you get started DJing and producing music? When did you start?

I started DJing five or six years ago and started producing about three years ago. I started to produce after realizing I was only limited to so much creativity through DJing. Once I started producing, I could not stop. I’ve experimented with most of the electronic dance music genres producing and found my heart with techno and tech house. Creating grooves and bass lines come naturally to me and there is nothing more enjoyable than sitting in a studio session, layering percussion after percussion to make an addictive, provocative groove!

5. You’ve just secured a residency at Audio Discotech SF. How does it feel? What do you think about the club?

It is an honor. The club is intimate but has a massive sound system that puts out the highest quality sound and bass. The booth is also positioned making it feel like you, as the DJ, are in the crowd. Literally allowing you to read the crowd better and become better connected with everyone’s energy.

Next up is a few new releases, first a remix I did for Monstergetdown called The Way, releasing on Kool Katz Recordings. I will be opening on the main stage at Beyond Wonderland Bay Area 2013, September 29th, at the Shoreline Amphitheatre and then I have my first show at Audio Discotech as a resident, October 5th. I’m really looking forward to playing many new productions in cue for release!