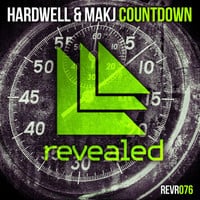 The highly anticipated Hardwell and MAKJ track now has a name, a two minute preview and teaser video. It is titled “Countdown”, and is set to be released October 7th on Revealed Recordings. First played during his acclaimed set at Ultra Music Festival 2013, Hardwell has established the song as a peak-time track in his sets all summer building the anticipation for this massive track. Check out the preview below via SoundCloud and the YouTube teaser video that shows the sold-out Go Hardwell Or Go Home event at the Palladium in Los Angeles.