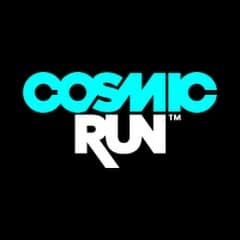 The first ever Cosmic Run was held in Chicago last weekend, and its first run was a huge success! The Hawthorne Race Course parking area began to fill up as the sun started to set, and eager racers made their way to gather around the event stage to wait for night to fall. Runners were dressed in black and neon from head to toe, with tutus and glow sticks, knee socks and tanktops despite the cool weather of the evening. The event was an all-ages event and everyone was welcome from children in little pink tutus to first time marathoners excited to see what was in store.

Tickets were available for presale starting in June via their website, and packets were available for pickup prior to the sold out event in two locations in Chicago. Booths were located at the front of the race for packet pickup, and volunteers ushered the crowd through the lines and handed out glowsticks. While waiting for night to fall, the racers walked among the several food and beer vendors that were located near the stage for after the event, and the crowd at the stage was entertained by local singer Shuree, who was filming a Music Video for a new single.

As the sun set and the crowds grew larger, hype men were on the stage with EDM pulsing in the air, urging everyone to bounce and warm up for the upcoming marathon. The glow sticks were thrown at the crowd and everyone was excited to start. It wasn't too long before the race organizers began shouting at the crowd to head to the start line as the race was about to begin at 8 PM! The crowd filtered through the maze leading to the beginning of the race, and the lights of the track shut down and color stations glowed bright Neon pink, blue, green and purple in the night.

The station at the beginning of the start gate was pumping up the runners, giving away free shirts and glow sticks and paint packets. A DJ spun EDM and released the runners into the night, through the maze of the Cosmic Run and through each color station where volunteers blasted neon, flourescent powder at each runner as they ran through the station. The marathon zig-zagged through the field and around the track through each color station, which were neon light tunnels of music and colored powder.

After the marathon was the electronic dance party held at the main stage, where a Chicago DJ kept the runners jumping and excited for the main event, house music producer Robbie Rivera. The music was able to keep the crowd hype into the night, but perhaps it was too late for Rivera to arrive as the main act. After all, his crowd had just ran 3+ miles and had already been raving before he arrived! Perhaps next time the main DJ should have more time with the crowd before their legs begin to fail them. Those who stayed for the after party (tickets were available for purchase for just that) raved into the night while those on stage through free merchandise and powder at the crowd while neon lights and lazers pulsed off the stage. Rivera dropped some well-known tracks into the night, and as the crowd dwindled the music just got louder and more exciting.

Overall Chicago Cosmic Run was such a success, and the organizers put on a show just as they promised. The race was epic and exciting, with volunteers dousing every runner in the neon powder, and the electric rave at the end was worth the ticket alone. There's bound to be rave reviews for the next events from Washington DC and Seattle in October to Phoenix in January. Some are already wait-list only, so make sure to get your tickets soon! Such a fun experience for everyone who was involved, and for the first year of the Cosmic Run it was a hell of a time.

Check out pictures from the Chicago event below, the promotional video for the Cosmic Run, and the official website with the rest of the dates for this year.

Advertisement. Scroll to continue reading.
In this article:Chicago, Cosmic Run