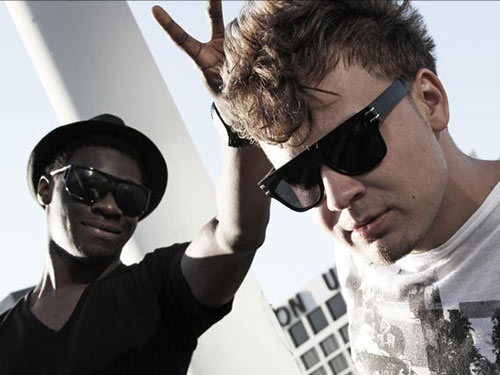 I had the really great opportunity to talk with a couple huge up and coming producers from Brooklyn, New York this week Mysto & Pizzi. With vast backgrounds in Pop and R&B working with such artists as R Kelly, Kelly Rowland, Justin Timberlake, Ciara, Beyonce and Britney Spears these guy have already established a tremendous reputation in the music industry. Aside from their busy production careers they still find time to connect with their fans through their immensely popular video blog mystoandpizzi.com. Giving their following a great insider look on the daily grind of a producer to just having a good time making mammoth beats. These two guys are pretty funny dudes with a plethora of talent.

As times change so do people, Mysto & Pizzi have taken the plunge recently into electronic dance music and have found nothing but success. The two have begun to find an extremely uplifting progressive sound with absolutely filthy breakdowns. In a summer full of Daft Punk the two executed their remix of “Get lucky” perfectly, receiving support from DJ's across the nation. Their latest remix was a bold progressive house anthem to Lana Del Rey's Young & Beautiful. So many producers set out to work with this bone chilling piece and I think it is safe to say Mysto & Pizzi take the crown for the top remix. They are the only ones who truly captured the essence of the track playing along perfectly with the epic vocal build up and then just blowing the roof off with a main stage drop. If you haven't heard this production yet listen below because you have truly missed out.

Keep an eye out for this production duo, I am very impressed and will be expecting big things in the future from these two.

1. How did the production duo of Mysto and Pizzi come to be?

Mysto: We met through a mutual artist around 2003. Not too many kids were making beats at that time so we kinda just clicked over that and started collaborating here and there. Then around 2006 we decided this is what we really wanted to pursue, took semesters off from school and just officially teamed up as a duo and been going strong ever since. The first record we placed together actually ended up selling Platinum and got us our first plaque so we knew we were onto something. We transitioned from HipHop to R&B and then Pop, got into songwriting and really learned how to produce records. But eventually we felt we were surpassing the pop world in production skill and were hungry for something bigger and electronic music encompassed all that and more.

2. Hailing from Queens, New York what were your biggest musical influences growing up in a State filled with so much musical history?

Mysto: Well I was born in Ukraine so some of my influences start there. Growing up in a very musical household I was exposed to a lot of Classical music. Then when I came to NY my first initial influences that I will always remember because they happened all at once was Ace of Base, Daft Punk, Enigma, Madonna, Nirvana and 90s Techno. Then came my HipHop phase which eventually LED me to start producing, with Dr. Dre, Timbaland, The Neptunes and Just Blaze being major influences. I also listened to a lot of Trance in the early 2000s with Tiesto, Armin Van Buuren and my personal favorite was a group called Dumonde, not sure if anyone remembers them but their melodies were amazing to me, I think some of their influences can be seen in some of our more recent productions.

Pizzi: I was always a band kid growing up. my first instrument was the trumpet from the 3rd grade all the way up to the end of junior high school so alot of the music I was influenced by at the time were bands like Earth Wind and Fire, The Stylistics and Cool and the Gang because I had to learn their horn sections for all the bands I was in. When I got into hip hop, it was around the Bad Boy era which I was really into because the stuff they were sampling were songs I was already familiar with. When I picked up the piano and started producing in high school, the guys I looked up to were Dr. Dre, Scott Storch, Just Blaze, and The Neptunes. It wasn't until I got to college that I really broadened my taste in music and started listening to alot more more electronic, rock and 80s because I never wanted to be known for just producing one genre of music.

3. Sadly New York recently had a dark shadow cast upon its dance music scene after deaths at Electric Zoo. What are your thoughts on drug use destroying dance music recently?

Mysto: It sucks honestly because over the years electronic music has gotten such a bad stigma because of the drug use associated with the scene, even though there is probably just as much use in any other genre or festival. I don't think outlawing or cracking down is the way though because realistically people are going to do whatever they want regardless and maybe even under more dangerous circumstances, think prohibition era. I think educating people is the way, about being more careful and knowing what you are doing before you do it. It's about safety. In the end of the day it should all be about the music and it isn't fair to those who truly just want to enjoy some new tunes and dance with their friends. WIth dance music growing so fast and becoming more than just a genre means we all, as a community, need to be more responsible and set the right examples.

Pizzi: It does sadden me because Electric Zoo is a great festival and I've been going since the very first one, but this is the first year that I didn't go. Awareness about the dangers of these drugs should be made more known because trying to reinforce them isn't going to be enough, because people will do it anyway. I also believe in being socially responsible for each other whether it's letting a friend know when too much is too much or when someone is in need of help don't just look the other way because it could of been someone you know.

4. With such an explosion of popularity over the last couple years what are you most looking forward to in the future of EDM?

Mysto: I'd love to see more depth in the musicality, more experimenting and incorporating new genres. Show and festival wise, I'd love to see more interesting visual installations, I feel the technology is there and some of these current stages are quite edgy but a lot is still left to be desired – in the artistic visual sense. I'd love to see more visual artists collaborate with the tech guys who create some of these already technologically amazing stages and see what kind of “dynamic visual installation” art can be created to go along with the music and create an experience for the fans. I think it's all about the experience, less DJ Worship. I'm curious to see what Sensation does next.

Pizzi: I'd love to see more live instrumentation in EDM not only in the production but in live shows as well. To Add to what Mysto said, I would love to see what they come up with next as far as stage design. I hope to maybe see 3D implementation for a set, so the crowd can go on an interactive musical and visual journey.

5. With backgrounds in R&B and Pop your recent remix of Lana Del Rey's Young & Beautiful in an uplifting progressive anthem. Is more of a progressive sound the future for you two?

Mysto: Well I feel our last few releases have been pretty progressive, like our EDX remix and even last single “Surrender”. We love creating melodies and chord progressions that contain a certain feeling, some uplifting and some more serious. So, in a sense, we will always be somewhat progressive. Even if we are going for a hard festival feel we'll still incorporate a very melodic section somewhere in the track like our “Get Lucky” remix.
But we can never pinpoint nor want to pigeonhole what our sound really is because we treat every record differently. We never stick to one sound, we try to reinvent our selves with each record and try something new. If its a remix we are making, then we really listen to the vocals, the lyrics, the melody and the feeling and try to create something that encompasses all of that and then takes it somewhere else. That dictates the direction where the rest of the record goes.

6. So many new producers are teaming up to form duo acts, is there an advantage working along side someone?

Mysto: Yes absolutely, two heads are better than one as long as your on the same page. When you collaborate, it allows you to come up with things you might've not been able too on your own and helps keep things fresh and gives two different perspectives since we both grew up with different influences. We motivate each other. We also multitask which allows us to take on more projects then we would individually be able to, while I'm finishing a mix on one track, Pizzi is already brainstorming ideas for the next or vice versa. Not to mention when it comes time for touring and shows its just way more fun with 2 people.

Pizzi: theres definitely an advantage because you have to keep in mind that as creatives, we may not always be inspired so its always cool to have a 2nd party to kinda keep the balance. sometimes I would start something and get an idea, which would spark new ideas for mysto, or Mysto would play me something new that he found online, or just a cool track to borrow elements from and that would spark an idea for me. plus we've been working with each other for years so we have a really good flow on how we attack each track or project.

Mysto: Honestly the only place we've played so far in the west coast is Greystone manor and that was really fun, but we would love to play Avalon next or Create. Also Ruby Skye in san fran. Really any venue that has a crowd that just really enjoys house music, who want to just dance and have fun will do for us. It can be a warehouse party, as long as it is a fun group of people we are ready to throw down.

8. If you two were not DJ'n what would could you see yourself doing?

Mysto: I would definitely be an entrepreneur of some sort probably revolving around social and new media or creative in the video/visual design field. Although a lot of my close friends think I should be a Psychologist lol. Then again if you think about it making good music and writing great songs which potentially could help people is kind of like therapy.

Pizzi: I feel I would be an entrepreneur creating fashion accessories and novelty items. recently i've been getting really into alot of video and visual work. infact, I created alot of the visuals that we use in our shows for the LED screens so maybe if I wasn't the one preforming, I would probably be doing that.

Advertisement. Scroll to continue reading.
In this article:#interview, Mysto, Pizzi