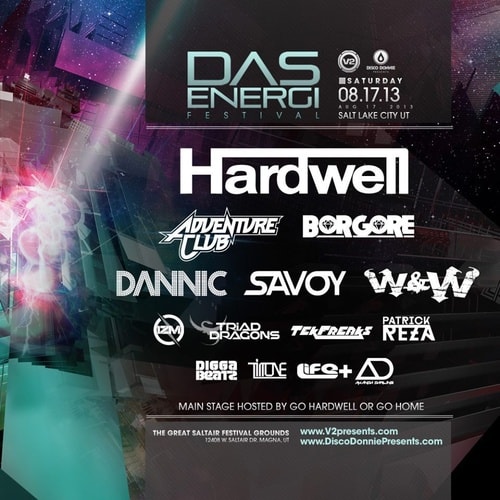 There are plenty of defining venues across the: Colorado has Red Rocks, New York has Madison Square Garden, California has the Hollywood Bowl. One of the hidden gems in this country is Saltair in Magna, Ut. For everyone’s first trip out there, they may find themselves muttering “Are we going the right way?” as Saltair is situated on the banks of the Great Salt Lake with absolutely nothing but salt flats and valley floor around it for miles. It even inspired the writing of the Pixies song “Palace for the Brine.” At this picturesque former marina this Saturday August 17th, Utah’s EDM event of the year will be emerging from the arid landscape at the Das Energi festival put on by V2 and Disco Donnie Presents, with the former throwing good enough parties that the SWAT team has had to break them up. The thing that makes any EDM festival special is first and foremost the lineup; Das Energi has supplied names that do not disappoint. Headliners include 2013 breakout Hardwell, dubstep savant Borgore and the Canadian duo Adventure Club. Combine these headliners with 25+ other acts on three stages, including local standouts, and you’ve got yourself a chest rattling, twerk inducing night to remember. Even with the lineup supplying all the hype, one shouldn’t stop looking there for reasons to visit this truly unique festival. The main stage, named the Temple of Boom, will feel right at home in the vast Utah desert as it is a former stage setup from the almost apocryphal Burning Man festival complete with all the LED fixings that one could ask for.

Even though Das Energi is, currently, not anywhere near the size of an EDC or an Ultra, neither one of those events can brag that they get to party all night on the shores of one of the most matchless backdrops the United States has to offer at Great Salt Lake State Park. Das Energi is setup to be a defining show in the slew of festival minutiae that gets slung at us every year. EDM Sauce will be there to bring you full coverage of this distinctive EDM festival! Tickets are still on sale and can be purchased here.

As we eagerly await the arrival of Adventure Club’s forthcoming album, the Canadian duo offers another preview with the release of new single ‘Here.'...

World-class producers and champions of melodic bass Adventure Club return with another look into their forthcoming, untitled album. After 4 lead singles in 2020...