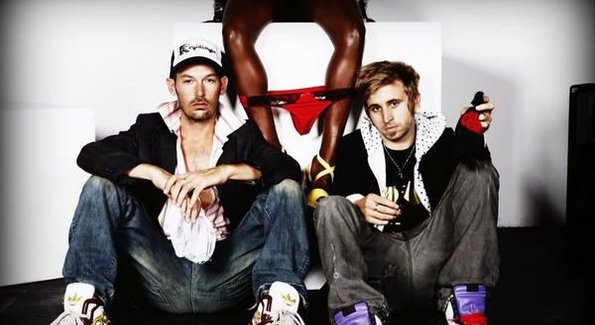 Last week at Chicago's Spring Awakening Music Festival, PANTyRAiD blew up Soldier Field with their genre-defying music. The duo – consisting of members Josh Mayer (Ooah from The Glitch Mob) and Martin Folb (MartyParty) – have had two successful releases, Superior and The Sauce, and followed up with another strong album last month called PillowTalk. I had a chance to catch an interview with them to get their thoughts on their name and concept behind their music.

EDM Sauce: It was the first time you two played at Spring Awakening. How did it feel to play inside Soldier Field?

EDM Sauce: PANTyRAiD started off as a collaboration between you two. How did that come about, and what made you decide to form a duo?

Marty: Back when I started writing music in 2006 in Costa Rica, I invited Josh down to DJ at a party I had. We didn't really know each other, but we hit it off and when he heard the music and we realized we were so similar in taste and style, we decided to make a duo. The name PANTyRAiD came soon later.

EDM Sauce: What was the idea behind your name PANTyRAiD?

PANTyRAiD: We just got tired of all the male-centric bro beats coming out. We felt we played well for the ladies of EDM and cater to the sexier side of the dancefloor. PANTyRAiD is a project for all those that like to dance – together or alone, as crazy and sexy as possible.

EDM Sauce: Marty, I've read that you try to weave in the aspect of storytelling with your music. And Ooah, you're behind the signature glitch sounds that we also hear in The Glitch Mob. How do you combine your two unique approaches together when making music?

PANTyRAiD: We both love storytelling and sound design, so when we sit together we spend time experimenting and developing new sounds and techniques, and then composing a path through the musical scale and intent to create a developing story. Then we twist the new sounds into that story and sew it all up.

EDM Sauce: I've read in an article saying that you're not trying to write a music to fit a specific genre. So how would you describe your music?

PANTyRAiD: 100% – we are very anti-genre – never understood it – why the bpm or kick/snare pattern made one song the same as another when they could have totally different emotions. So we have never played into them; we just love hip hop music and bass expression, so we sort of make hip hop songs with synthetic rapping. Ever since the first release it's been the same. We definitely get inspired by sounds and styles we hear along the way and try and bring some of that into the songs to remain relevant, but we have had the same sound and will always make sexy dance music, at all kinds of bpm's.

EDM Sauce: What was the concept behind your newest album PillowTalk?

PANTyRAiD: It is a voyage through the seduction, the excitement, the aftermath and the reminiscing of the party night with sexy interlude. Something for everyone.

EDM Sauce: What's next for you two?

I, along with the EDM Sauce team, certainly look forward to hearing what Josh and MartyParty have to bring to the dance floor. In the meantime, be sure to check out PANTyRAiD's latest album PillowTalk.

Advertisement. Scroll to continue reading.
In this article:pantyraid, The Glitch Mob