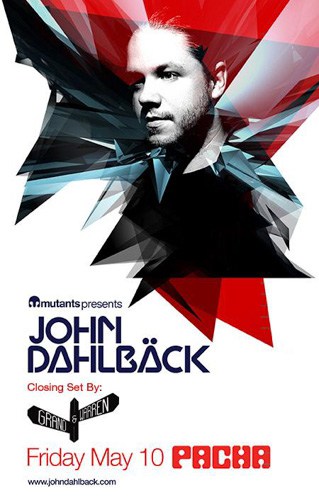 Last Friday the Swedish house music producer and DJ, John Dahlback made an impression at Pacha NYC. The ambiance of the club was full of energy with everyone expressing themselves on the dance floor.

John Dahlback’s sets are an experience; the Swedish Sensation was rip-roaring with an extreme intensity. He is known for consistently producing banger after banger. Friday night he played tracks like “Embrace Me,” Pressure,” Zedd’s “Clarity,“ and his newly release monster track “Nuke.” Brace yourselves; listen to the wild track below.

After Dalhback‘s set, the night was closed by an up and coming duo DJ Grand & Warren. This was not their first time at Pacha, the duo have been truly working hard getting their name out their. These two Jersey Boys having been putting a lot of work and dedication it was showed on Friday. Gary Rabbit and James Alexander met in high school, the two reconnected and saw they had same common interest in music and decided to collaborate together. Grand & Warren have also made appearances in well known clubs in the tri-state area like 4Sixty6, Bliss Lounge in New Jersey and Lit Ultra in Philly.

Once the duo stepped foot in the DJ booth the energy of the crowd amped up completely. These two really know how to keep the party going they’d played tracks from Tiesto, Kaskade and also added some mainstream pop aesthetic to their track list as well.

I had the pleasure to talk to Grand & Warren and ask them a couple of questions.

What's sets you apart from other duo DJ's?
There are many things that set us apart from the other duos out there. Gary wears a Mask, we bring our street sign at every party we throw and we bring a following out that truly believes in us. But what separates us the most from others is our energy that we bring to the club. We get very excited to play and we feed off of everyone else's excitement.

How do you both collaborate?
After much trial and error, James and I have come up with a system that seems to compliment our talents best. James is really good at writing hard drops and I'm better with melodic build ups. It's good chemistry that works.

What DJ's do you look up to the most?
(G) The list is endless. Personally, I'm a big Calvin Harris and Dirty South fan. I really enjoy listening to how they structure their tracks, respectively, as well as their skills during live performances.
(J) I'm a big fan of more club house music. I enjoy the darker sounds. Artists such as Dimitri Vegas and Like Mike as well as Hard Rock Sofa inspire me in my writing when Gary and I collaborate. Jewelz and Scott Sparks are other artists that are definitely our favorites.

What are you goals/ plans for summer 2013?
(G/J) Well, we are just putting our finishing touches on our E.P. with Nicole Medoro. She's an excellent lyricist and has an awesome voice. So, plans for this summer would pushing the E.P. an continuing to play as many shows as possible.

It was such a pleasure meeting Grand & Warren. This duo DJ is a force to be reckoned with!