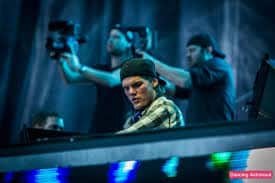 So wake me up when it’s all over! Aloe Blacc and Incubus’ guitarist Mike Einziger joined worldwide electronic music producer Tim Bergling (Avicii) at this year’s Ultra Music Festival. They opened up the show with their new collaboration called “Wake Me Up”. This year Avicii was hoping to entertain the crowd using a different approach by adding some live instrumentation to his set. Performing this song live at Ultra helped him get a feel on how the audience would react to this daring new proposal. Mike was first surprised by Avicii’s fortuitous inquiry, however wanted to see where he would go with this. Avicii reviewed the audience’s response and considering the outcome, Avicii then asked Mike Einziger to take part in an upcoming album that is still in its process.