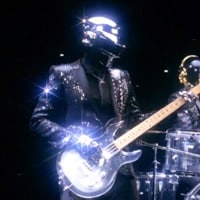 Do away with your 10 hour Daft Punk loops based on their SNL commercial spot – the first track (titled ‘Get Lucky') to leak from Random Access Memories has Nile Rodgers on guitar and Pharrell Williams supplying vocals is here.

This album has a plethora of guests bringing new elements to Daft Punk tracks we haven't heard before. If anything, this leaked song could be a great indicator for a very strong, very fun album.

The song was “leaked” by a Canadian radio station, who also reported that the song was meant to be released tomorrow. This, plus an SNL ad spot and News that the album release event will be based out of an Australian agricultural fair shows that if nothing else, the Daft Punk camp knows how to keep the internet on its toes.

UPDATE: The station has claimed that this is not the finished version of the track.