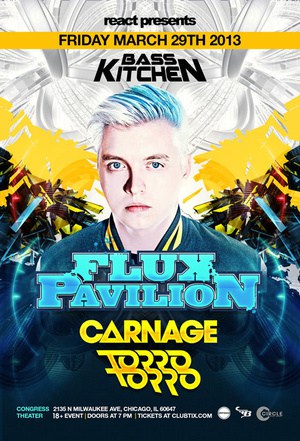 Less than a week after I came back from Ultra, I went to Congress Theater this past weekend to see Flux Pavilion, who was joined by Toronto duo Torro Torro and festival trap producer Carnage. Knowing that Carnage and Flux would be playing in Chicago shortly after Ultra, I had missed them and was excited to finally catch them in a tighter, smaller setting for the sold out show.

Dedicated Torro Torro fans went wild for Torro Torro's remix of “Roll the Drums” and “Clarity” and the crowd began to get livelier when the duo dropped Zed's Dead's remix of The Prodigy's “Breathe.” Carnage brought down the trap with Kanye West's “Mercy” and tracks off of his festival trap mix, such as Zatox & Nikkita's “Poltergeist.” He even brought in a hint of hardstyle with a bit of Showtek's “Fuck the System,” which led into the crowd favorite, Carnage's remix of Hardwell's “Spaceman.”

The crowd truly came to life the moment Flux got on stage and opened with “The Scientist,” where he pleasantly surprised the crowd by providing live vocals. Flux dropped several tracks off of his hot new album Blow the Roof, including “Starlight,” “Do or Die” and “I Feel It,” and he echoed Major Lazer's recent performance at Congress with his collaboration track “Jah No Partial.” Some Flux classics made it to the set, and the crowd sang their lungs out to “Daydreamer,” “I Can't Sop” and “Bass Canon.”  Flux kept his set varied and continued to keep the crowd jumping on their feet by playing other artists, such as Knife Party's “Internet Friends” and Dillon Francis's “Bootleg Fireworks,” which brought memories of Dillon's Congress set from a few weeks before.

Although I was still feeling the exhaustion from 3 days of extensive dancing at Miami, Flux's set was so full of dance-inducing bass that I was able to forget about being tired and partied as hard as the people up in the front. And after his performance, I'll be listening to his Blow the Roof EP on repeat again.
In this article:Carnage, Flux Pavilion, Torro Torro