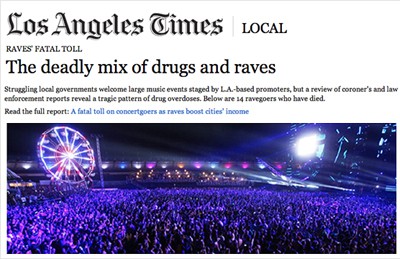 This past Sunday, the LA Times published an article which singled out the EDM community by going into detail about the deaths of 14 people who have attended electronic music events. The LA Times reported that the events in which these 14 people died, was due to ecstasy overdose, beginning with Insomniac's ‘Nocturnal Wonderland' back in 2006.

Ron Lin, Paul Pringle and Andrew Blankstein were the writers behind this story and have shone before they don't take too kindly on the EDM Scene. They began the article with a video of a teary-eyed father who went into detail about getting the call that his son had passed away due to ecstasy overdose back in 2006. The article then has a poll which asks “Are cities relying too much on the income from raves?” Right now as it stands the poll reads 95% No.

The article then expresses more about the people who passed and then links up to the 14 people who have passed away, along with how they died. The article puts blame on Insomniac and many of the other concert promoters. It wasn't long until Pasquale Rotella (CEO of Insomniac) chimed in on Facebook and Instagram to state that

the LA Times treated the opinions of a few people as gospel, turned everyone who enjoys electronic music events into villains, and ignored anyone that did not agree with their biased opinion. Rather than addressing the real issue, rampant drug use in the United States, Rong-Gong “Ron” Lin II and his team preferred to attack our company, our events, our music and Pasquale instead of doing any credible research on health and safety issues facing large music festivals across the world.

It wasn't long until Kaskade, added his two cents on his Tumblr account with the title “No One Knows Who We Are.” Here Ryan Raddon aka Kaskade says

I am dug in so deep that articles like this one, smacking of uninformed bigotry fire me up in a pretty passionate way. To assign responsibility of regulating drug use to concert promoters is ludicrous, in the extreme. To paint a picture (bordering on hysteria) of a community of people as capricious and reckless drug users is irresponsible.

While the lives of these 14 kids shouldn't be over looked, but each and every single person must take responsibility for their own actions. We are all adults who attend these events and need to be knowledgeable as well as responsible for our own actions. For the LA TimestTo paint a picture of the entire EDM community as irresponsible and reckless drug users is absurd. Feel free to reach out to the writers of this article and express your feelings.