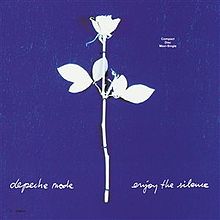 Today's #ThrowbackThursday EDM track dates all the way back to the year 1990. The track “Enjoy The Silence” by Depeche Mode was recorded in 1989 and released on February 5, 1990. It was the second single off of the album ‘Violator.' This song is known to be the signature song by Depeche Mode and is actually one of my favorites.

You may think “Enjoy The Silence” is not your typical EDM style of music and you'd be right for the most part, but it is considered to be Alternative Rock, Electronic Rock and Dark Wave.

In this article:#ThrowbackThursday, Depeche Mode

Depeche Mode have been very vocal that new music was on the way. More recently they promised a new track on February 3rd from...

Rock and Roll Hall of Fame Nominees are Getting Electric

The 2017 Nominees for induction to the Rock and Roll Hall of fame are out. Making the 2017 ballot-Depeche Mode, Chic and Kraftwerk. Electronic...

Legends in the realm of dance music, Depeche Mode has announced their first album in four years. The group best known probably for Johnny...