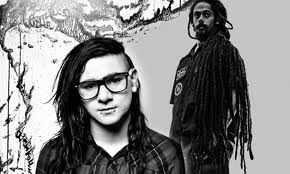 Has Skrillex fallen from grace on the EDM circuit? Or are his critics basically just jealous of his success? Criticized for being “just a button pusher,” Skrillex is without a doubt one of the many faces of today's modern electronic music. It could be argued that one of the reasons for Skrillex‘s unpopularity right now is, paradoxically, because he took the genre mainstream. Some blame Skrillex's choices in music recently (for example, his remixes of more pop songs and Levels). But mostly, Skrillex is part of the great debate regarding djs who use turntables and keyboards vs djs who use CDs and mixing software. Lately, it seems that the most popular djs are sadly ones who don't know much about music at all, but possess alot of technology know-how.

Without a doubt, it takes a strange and magical combination of talents to become famous for anything, and even more so for djing. A keen awareness of the crowd, showmanship, plus musical ability, and lately technology skill, are all required. In a recent video interview, Skrillex shared his thoughts of fame, ‘haters', and why he loves electro – in all it's forms.

It wasn't a plan… I didn't think about it… I just made music. People expect me to do a certain thing, work with only famous artists… I just want to wake up every morning happy, knowing that I made music that I liked.