Yellow Claw, the producing duo from Amsterdam is back with a new bass-heavy ballad featuring L.A.-based artist, Valentina. The song is called ‘Villain' and profiles the trials of a break up in that someone is typically made out to be the ‘bad guy.'

Valentina's powerful pop vocals lay nicely over a mellow harmony that has bursts of high-pitched synth, and accompanying electronic keys. The music video, also out now, stars Valentina along side Yellow Claw's very own Nils Rondhuis as the memory of her ended relationship.

This release is a follow up to the duo's 2017 Los Amsterdam album. After a bit of a break of touring, you can expect to see these guys touring the festival circuit this summer with upcoming shows EDC Las Vegas & Tommorowland, just to name a few.

Check out the new video ‘Villain' below. 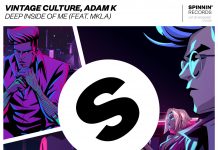 Vintage Culture and Adam K present ‘Deep Inside Of Me’ (feat. MKLA)