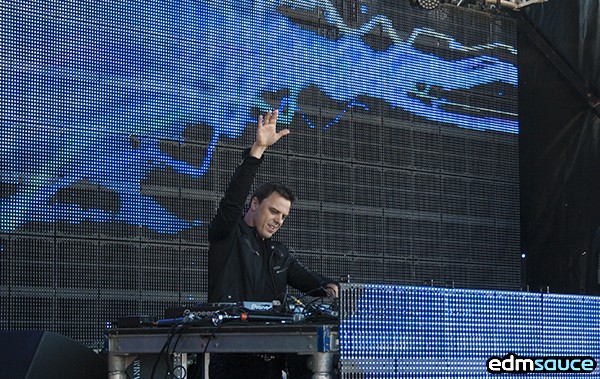 It has been a wild Miami Music Week for trance DJ Markus Schulz thus far, even though he conveniently lives in Miami. “It's quite nice to sleep in my own bed every night,” Schulz said. “It started for me early this week, I have six shows and then Friday and Saturday I’m going to Denver, CO and then Houston and then I come back for Ultra on Sunday so it's a quite a busy week for me.”

Over these next few weeks Markus Schulz will be traveling the country promoting album, which is set to be released at the end of April. “The new album comes out April 29th,” Schulz said. “It's called Watch The World — very excited about the album.”

“You know, the cool thing about this album, when I was young I used to do a lot of creative writing and I was quite good at it and teachers encouraged me and everything, but when I started DJing and when I started producing and I started making the sounds and the melodies, all my creative energy went into that. So with this album though I collaborated with a lot singers, a lot of songwriters to write the stories themselves be a part of that creative process, the actual writing of the messages in the songs and I’m very proud of it. I mean it's not just a put your hands in the air kind of album. It's a lot of thoughtful messages and I’m very, very proud of it.”

You may have heard one or two tracks from the album already, such as Destiny — the single Markus Schulz first premiered at last year’s Ultra Music Festival at the ASOT Stage.

“Like one of my singles Destiny — well that really gave me the confidence in the whole song writing again,” Schulz said. “Because that song was written about a personal relationship about when you meet someone for the first time and a lot people that song touched them and it really gave me a lot of confidence to kinda go forward with this album with the same idea of writing messages and stories that are important to us, as Trance Fans.”

As an EDM Sauce writer, I got to experience an emotional and incredible open-to-close final performance set late last year at Pacha NYC. Although Markus Schulz played until 6:30 a.m., many fans and friends still stayed with him until the end.

“The people that stayed till the end like that those are the last people standing — I could go all night hanging out with them just playing music,” Schulz said. “The thing is towards the end like that, you’ll have the people like that around you’re DJing, but you’re not DJing in a true sense, you’re playing music for your friends. It's like you’re in your living room and you just happened to be at Pacha with a few hundred people are left of really great people — fans, people that are on a really close frequency and you’re just playing some of your favorite songs, for me, I love that time of the night.”

After a decade of business the nightclub Pacha NYC would finally close doors to public and he wanted to “honor the venue.”

“I knew that would be the last time I would play there in that building at Pacha and I had so many amazing moments there and Pacha,” Schulz said. “It's just a legendary club so it was kind of a bittersweet knowing that this would be the last time so I wanted to do something not only put on an amazing show so go down to the rabbit hole one final time there and being nostalgic at the same time play some of the big tracks that I’ve been playing there over my career at Pacha. I wanted to honor the venue so for me it was a very special night as well.”

Today, Sunday March 20, 2016 — Markus Schulz will be performing at Ultra at the ASOT Stage where he will be playing a couple of tracks from his new album Watch The World — if you saw his last year’s performance this year’s will be even better! Do not miss Marks Schulz at Ultra, performing at 5:00 p.m. “As a matter of fact, there's quite a few tracks that I’m going to debut different mixes there. It's going to be a good set. There's also quite a few tracks, new remixes that I had done just for my set at Ultra that you are going to hear so it's going to be fun!”