After last night's incredible DJ set on #ULTRALIVE, Deadmau5 was tasked with taking the stage once again, but this time in front of the A State of Trance audience.

Deadmau5 opened up with some classics including his legendary track “I Remember,” but to no surprise, Deadmau5 had to troll Ultra one more time. Last year, Deadmau5 took Avicii's place and decided to play an unforgettable remix of “Animals” last year. We knew it was only a matter of time before Deadmau5 trolled us on more time. This time, Deadmau5 decided to play death metal to a very unenthusiastic crowd.

Well… More of that I guess… I'll switch it up and finish it off with some Australian black metal. https://t.co/bnc9ZC1oH5

Well that was interesting.

Took the words out of our mouth. 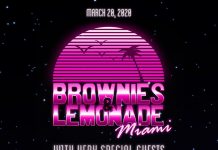 Apr 2, 2020
Another week locked away, another week doing nothing. Well, at least tomorrow is Friday (which doesn't mean much anymore) and we get a shit...