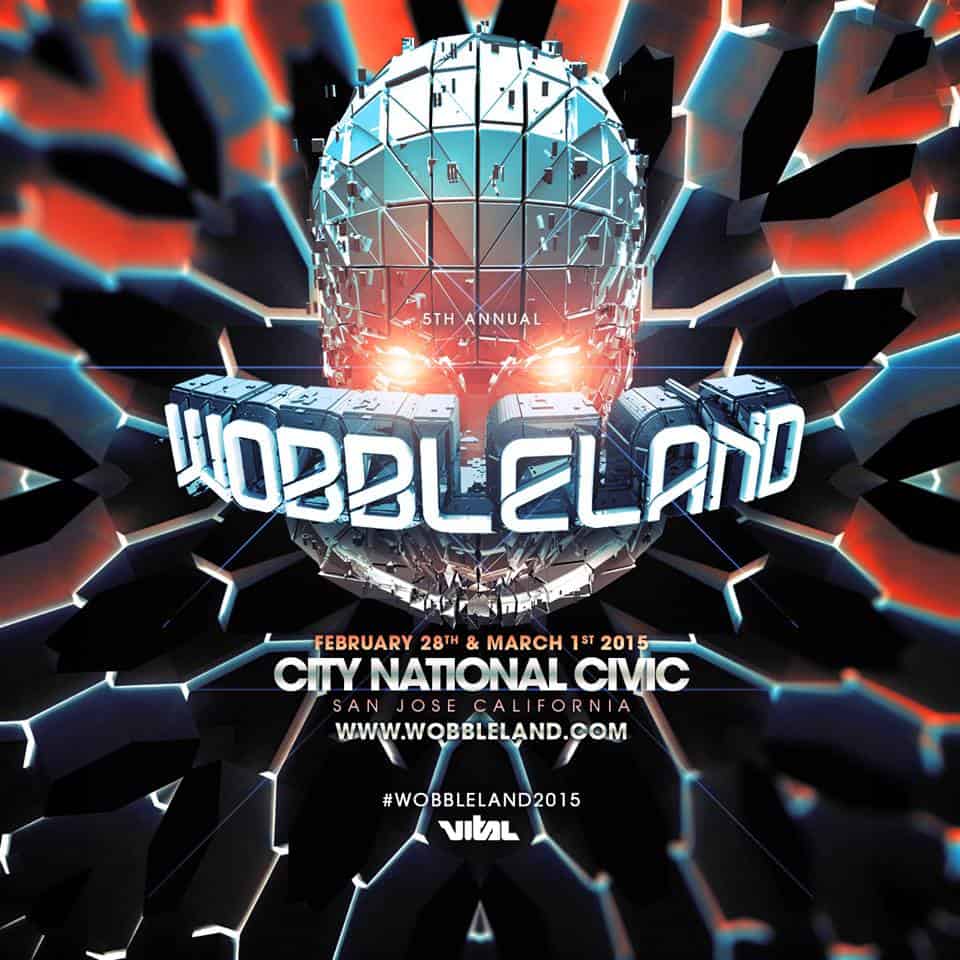 San Jose, California was hit in the face with some major bass thanks to Vital premiere bass event, Wobbleland. For the first time in Wobbleland history, the event grew to a two day experience to showcase a variety of bass artists. Within the two days artists like 12th Planet, Kill the Noise, Brillz, and Jauz took the stage as well as P0gman, Getter, Dubloadz, Midnight Tyrannosaurs and many more. As the first day started on Saturday, we approached the venue to witness a line that had already wrapped around the block as anxious attendees flowed inside. Once inside the entire venue the sound and stage design took over. The stage took on a massive face with 3D mapping which ended up flowing terrifically throughout the night. Dubloadz and P0gman were first to get the night started. If you aren't familiar with these two guys then it's safe to say you are missing out on some heavy production. We got talking with a few fans who made the trip there just for these guys and had made sure to make it inside early.

Feeling a little shocked they were first to play, we were welcomed with a good start to the night. Keeping the music going was San Francisco native, Megalodon. Since coming about in 2008, Megalodon has shared the stage with all the major players in the bass scene. Being no stranger to the area, he took the stage and threw down like no tomorrow. As the night progressed, the venue became a packed house from fist floor to the balcony. Before we knew it the hours went on and the music was in no way slowing down. Minnesota and G Jones executed a set of original creations that had place go insane. Taking on a more so different vibe than earlier in the night was the presence of trap. Even though Wobbleland usually has been more focused on dubstep, this year to our surprise had a pretty even lineup between trap and dubstep artists. For a good three to four hours of the night, the dubstep was small to none as trap took over.

Representing much of the trap for the first night was Jackal, Boombox Cartel, Grandtheft, and Loudpvck. Their sets didn't disappoint as the crowd was moving all night long. The night was in full effect as Jauz took the stage. He announced it was his first hometown show since blowing up the scene within a year. His set shook the venue with his take on wobbles, that was more on the Future Garage side of the spectrum. It was a nice change in the night as he played his remix (which recently hit one million views on Soundcloud) of Riff Raffs' Tip Toe Wing In My Jawwdinz and his original Feel The Volume. His set soon came to end and asked everyone get ready for a family photo, including all artists on stage. His closing song was an unreleased collaboration with Skrillex and the crowd went absolutely nuts. You can tell this was a huge moment for Sam and we are ecstatic to be apart of it.

Ending the night was no other than 12th Planet. This man has been noted as the King of American Dubstep and the one to bring dubstep to the masses in the states. Showing no mercy for the crowd, he unleashed one of his heaviest sets I have ever witnessed. Track of track had the entire venue craving for more. The bass can be felt from every corner of the dance floor especially from tracks like Crowell & Bommer's – Yasuo VIP as well as many new originals. The first night of Wobbleland came to a close before we knew it and it was already one for the Books. Looking forward to next night, the fans could hardly weight.

Night two of the Wobbleland approached and we were already back at the venue to a similar sight – line down the street and around the block. Seeming like it was déjà vu, we entered the venue looking forward to it once again. Once inside playing was two artists that have seemed to stand their ground in the scene was Midnight Tyrannosaurs and Grimblee. No matter the time, these two played it their all as if it was their last. Even for a Sunday night, the attendees of Wobbleland came from all over to come for a night full of Bass Music. The dance floor soon got full as Jackal came on. This young producer has recently come about working with multiple artists on the lineup such as Boombox Cartel, Loudpvk, Woolymammoth. Having him play his own set on the second day was a nice treat to others who didn't get the chance to see him the day before. The night went on and the music got heavier. Getter and Trollphace went back to back feeding off the energy from the crowd as well as themselves. You can tell from their stance, these two love doing what they do. Huge part of the night is when they had every person get to the crowd right before Trollphaces' beloved ‘Get Low' remix and had the entire venue jump up at once. What a sight to see.

Must Die soon took over and threw out track after track like no tomorrow. The night was in full effect as the crowd was in sync to the music flowing about. After numerous tracks from his recent album release, Death & Magic, it was nice to hear old as well a new tracks hidden within. The clock hit 9PM and Snails hit the stage. This guy has had a huge come up during 2014 and his set and production shows there is nothing stopping him in the future. With his unique sound design, its always great to hear fresh original music. The night ended with Brillz and Kill The Noise taking over. Both having a separate hour long set, it was a tremendous way to close out Wobbleland. Brillz had the crowd going outright nuts with his MC, Oz going all across the stage.

Kill The Noise finally closed out the weekend throwing in a whole mix bag of genres. Even his Meow Machine track with Dillion Francis went off. The ending to a great weekend was here and the lights soon came on. Looking back, Wobbleland as a two day event shows there is always a need for bass music. Fans wait all year for this one event and this year was no different. We are all looking forward to whats next and we already can't wait for the next installment of Wobbeland. Huge thanks to Vital Events for having EDM Sauce out and a big thank you to everyone involved!

Keep up to date with Vital Events on Facebook
Photo credit to Holy Mountain and DTM Photography
Advertisement. Scroll to continue reading.
In this article:California, dubstep, Vital, Wobbleland