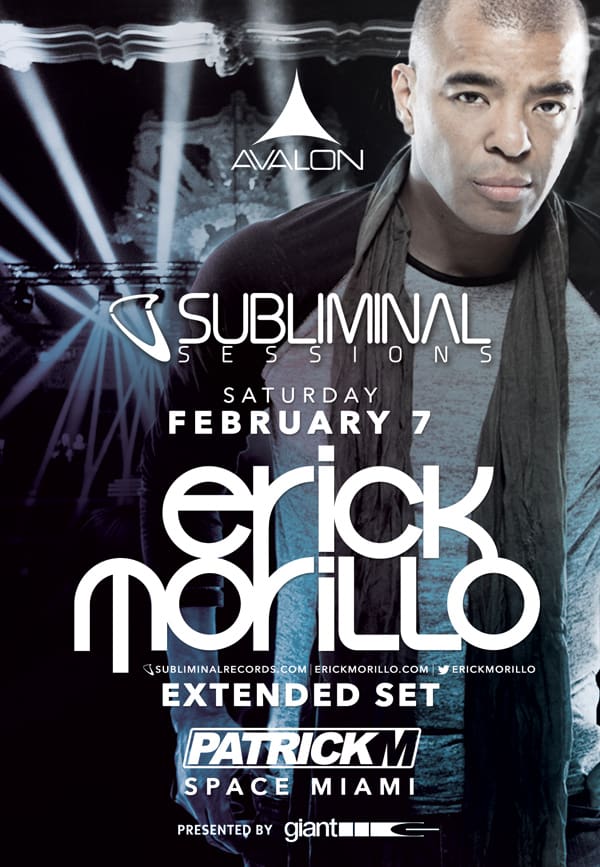 On Saturday, February 7th, Avalon proudly welcomes the return of Erick Morillo’s Subliminal Sessions showcase for a special Grammy-weekend performance, and the official relaunch of his label Subliminal Records. To commemorate this special night, the legendary DJ / producer will be spinning an extended all-night set, with support from Miami house pioneer Patrick M to get things warmed up for the night. Adding to the excitement, Avalon is officially unveiling its brand new bass spewing 40 inch subwoofer, created by Avalon’s founder and industry legend himself, John Lyons, in conjunction with EAW.

Erick Morillo is synonymous with house music. The Colombian-born, New Jersey raised industry veteran has enjoyed decades of success, and shows no signs of slowing down. Regarded for an unparalleled workhouse mentality, Erick Morillo has toured extensively throughout his career, sometimes playing up to 30 gigs in a month while producing dance-floor smashing tracks and running multiple successful Record Labels.

Avalon is no stranger to celebrity appearances. Prince, Tom Cruise, Kanye West, Fergie, Justin Timberlake Lindsay Lohan and Olivia Munn are just some of the iconic pop culture personalities to show up at the historic venue. Not to mention electronic acts like Steve Angello – who has infamously spun B2B with Morillo – Skrillex, Dillon Francis and Markus Schulz frequently popping up unannounced, making the phrase “Anything Can Happen” a reality at Avalon Hollywood.

While other venues may opt for sound systems featuring a du jour brand, Avalon has its own namesake speaker series. No stranger to conceptualizing game changing speakers, owner John Lyons is an audio expert responsible for installing sound systems at some of the world’s leading nightclubs. On this night, Lyons will unleash a new, unprecedented 40 inch subwoofer – more than double the biggest one currently inside a venue. Doing so adds to the “Avalon by EAW” CLUB.one Sound System, which John Lyons designed in conjunction with EAW. The innovative setup was unveiled at Avalon this last year, replacing the original Avalon EAW system that was recognized as a world leader and can still be heard in hundreds of nightclubs around the globe.

On this momentous evening, dance music will bear witness to the re-launch of Erick Morillo’s groundbreaking label, Subliminal Records. Returning to it's roots, the legendary imprint returns to the pure house sound that originally pushed Morillo and his peers into the limelight. With the recent explosion in electronic music and the introduction of so many new sounds and styles, Subliminal Records will strive to release music that even the most seasoned house veterans will appreciate, providing an outlet for the classic house grooves that Ibiza partiers know and love. Avalon welcomes the inaugural Subliminal Sessions showcase to it's hallowed decks, hosting this proper relaunch with an extended set that will surely keep the beautiful crowd moving until the early hours of the morning. Expect to enter the club at night and be glued to the dance-floor until the sun comes up. Special guests have also been known to frequent Erick’s Subliminal Sessions parties, so come prepared to stay far into this Grammy-weekend night.

Supporting Erick will be Patrick M, providing infectious beats to get the crowd started off for the epic night to come. Patrick M’s unique brand of deep-funky house has kept dance-floors moving in Miami since 2003, when the artist made the move from his original home of Buenos Aires, Argentina. He’s toured across the world, touching down in dance music meccas like Ibiza, Madrid, and Tel Aviv, and has held a residency at the prestigious SPACE Miami. His skills as a selector are evident when he steps behind the decks, so make sure to get to the club early to catch his energizing, funky set.

Join Avalon for a Grammy weekend extravaganza unlike any other. Featuring an extended set from one of dance music's legendary figureheads and the very first Subliminal Records re-launch party, February 7th promises to be a night that won't soon be forgotten. Erick Morillo possesses strong ties within all spectrums of the Music Industry. LA native and close personal friend, Diddy, will surely be making his Grammy rounds all weekend. Look out, because a certain hip hop mogul could very well be in attendance.