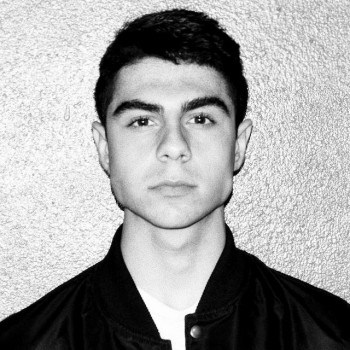 “I just ended up coming up with something really weird for it. I ended up winning out of 60+ entries. I didn't expect it at all, because I felt like some remixes were definitely better than mine. It's the first competition I won label wise, so I didn't expect it (Speaking in regards to his remix of “Same Damn Sound”).”

Jace Mek started off as a drummer, having played for 7 years throughout his schooling. His musical talent helped him immensely when he made the transition to producing, having already mastered reading music and rhythm.

” In a way yes, in production, especially within Electronic Music, there's tons of percussion involved, so it helped the transition a lot easier and it helped me with my percussion patterns ‘cause I tend to jump out of the regular 4/4 patterns, differentiating my sound. Drumming really helped.”

With a sound all his own, Jace Mek’s music is filled with fast paced, infectious beats that make you want to bounce and have a good time. When asked to describe his sound, Jace said…

At only seventeen years old, Jace Mek has garnered support from the likes of Alvaro, GTA, MAKJ, Victor Niglio, Astronomar, and Wuki, just to name a few. The success he has achieved thus far pushes him to work that much harder in mastering his craft and honing his skills.

”It's overwhelming to an extent. Realizing that a lot of producers older than me don't even get that kind of support, it's great. I'm thankful for it and at the same time it drives me to work that much harder. I just want to change the scene with a new sound.”

Pushing the boundaries of his creativity, Jace Mek plans to come out with his EP later this year. Experimenting with different sounds and genres, each track will have its own distinct flavor to it.

“I have a pretty big release coming up soon. This year, I'm trying to release an EP. It'll be a wide variety of sound with 4 tracks, each one with a different style. I also have tons of collaborations in the works with artists like JSTJR, The Hi-Yahs, Happy Colors, and Choppa Dunks, to name a few. Shout out to Kzeero, the whole Main Course Crew, Frankie Sanchez, Los XL, and all my other producer homies! And of course, my favorite Dutch dude, Hasse De Moor (Sorry Tiësto). I appreciate the support that everyone has given me thus far and the only thing I ask from everyone is to keep listening because I have some gnarly tunes on the way!”

In this article:interview, Jace Mek