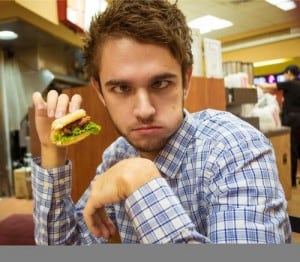 Zedd has had a killer year as a DJ and producer. He has established himself as one of the best EDM artists in the world by playing numerous sold out shows, winning a Grammy for his hit song, ‘Clarity', and recieving an MTV music video award for ‘Stay the Night'. He has also collaborated with some major mainstream artists such as Ariana Grande, and has released the hit single “Find You” featuring Matthew Koma and Miriam Bryant, which is included on the soundtrack for the film Divergent.

Aside from being an awesome musician, Zedd has shown his fans another side of him through his Twitter and Instagram. From his posts, we've come to love Zedd for countless reasons. However, we were able to narrow it down for you. Here are the top 10 why we want to be best friends with Zedd.

1. His flannel game is on point

2. He is the master practical joker

(sorry no naps on tour!)

4. He loves bacon just as much as we do… (maybe even a little bit more)

5. He's not afraid to get a little goofy

6. His Bromance with Martin Garrix

7. He donates to charity

8. He knows exactly how to shave it up

9. He has stepped up as the newest face for an anti-smoking campaign, promoting a healthy lifestyle

10. He always knows how to have a good time