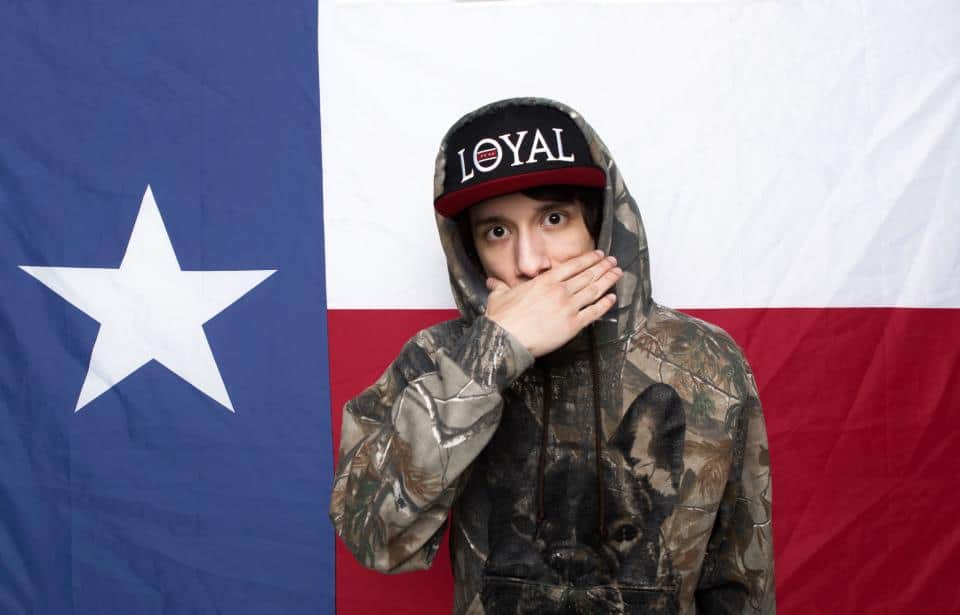 Along with Destructo and Paper Diamond, I was able to sit down with Texas native Crizzly, and shared a few words with him about Pizza, music, and how he became the crunk DJ we all love today:

What's up guys! I'm hear with the one and only crunkstep god Crizzly, dude how are you doing?

So you just wrecked it hear at LAN, how does it feel to play for the hometown crowd?

Chris: “It's the best feeling, I mean, there couldn't be a better feeling, this is where I was born and raised, and I honestly wouldn't wanna play anywhere else, I'm fine with playing Texas for the rest of my life.”

Speaking of Texas, you got to work with a Texas Legend, Slim Thug, what was that like, and do you plan on working with any other Htown rappers?

Chris: “Yeah working with Slim was crazy, one of his producers hit me up and got me in contact with some vocals, and I used those vocals on that track, there wasn't really a connection with me and Slim. I kinda did it under the radar without him knowing it, and then I met him almost a year later, I had it for so long and then I met him and was like ‘yo I'm doing this track' and him and his manager are super chill, and so then we just released it on soundcloud for free, and that kinda blew it up- that was one of my favorite tracks to make for sure.”

I saw you at TomorrowWorld as well, how does  an international crowd feel opposed to a hometown crowd?

Chris: “It's hard to say, you know, because I just go up there and do my thing. I mean I'll pay attention to the crowd and look at all the different people; the TomorrowWorld crowd was awesome because its 21+ which is totally different.”

Yeah I know, there was so much room to actually dance and breathe!

“Yeah exactly! And that's the type of crowd I like to play for, because that's the type of vibe I prefer when I go to a show, and that was the type of vibe there and it was awesome. Yeah but it's just different, there's so much love in Texas- everyone is family, I love the f*cking fam. So yeah, TomorrowWorld and Lights All Night are both equally awesome festivals, and you know I just have to more love for Texas.”

I can relate! So how does it feel to be the leader of a subgenre, and how do you feel you've inspired others?

Chris: “Yeah it's crazy! I never really think about it all the time, it struck me maybe at the beginning of the year; like wow this crazy I was doing hip hop and EDM before everyone jumped on it. It's just weird to think like wow, and then I think about it and that's why I'm at where I am today and I should appreciate that. I was lucky enough to catch that break, and that's what you have to do as a struggling artist, you've got to catch that break, the timing has to be perfect, and I happened to luck out and have the right idea at the right time. It's awesome to have my own identity, and I embrace it more because this last year was like an identity crisis almost, because everyone is making trap. As a producer who just wants to do something different, it was tough to keep doing hip hop when everyone is doing trap. It's like kind of discouraging almost because someone before me will play all hip hop, and someone after me will play all hip hop, and so who wants to hear more hip hop you know?… but I figured out, I have my own sound when it comes to hip hop, and everyone can do their own thing with hip hop, and do all this trap stuff but it doesn't go hard most of the time. Sometimes it goes hard, but sometimes it doesn't…. I've learned a lot from trap too though, like how sampling can help you out when you get stuck on a track…”

So you were talking about an identity crisis, and now you've adopted this identity with the Pizza Gang, so I wanted to know where that idea first came from?

Chris: “Just my homies on facebook sharing pizza slices, and we just kept sharing memes back in forth, so I just went with it, because I really do love pizza, honest. Most important thing is being honest, and honestly I love pizza.”

What is Crizzly's perfect pizza then?

Excellent choice, so since Christmas was just yesterday I have to ask, what was the best present Santa brought you this year?

Chris: “a pizza pillow! It was from Justice, my sister, and I didn't realize how much my family listens to me or follows me, because they're not into it all, but they're really supportive and I was thankful for that!”

and check out his last mix CRUNKSTOP VOL. 3:

In this article:Crizzly, interview, lights all night