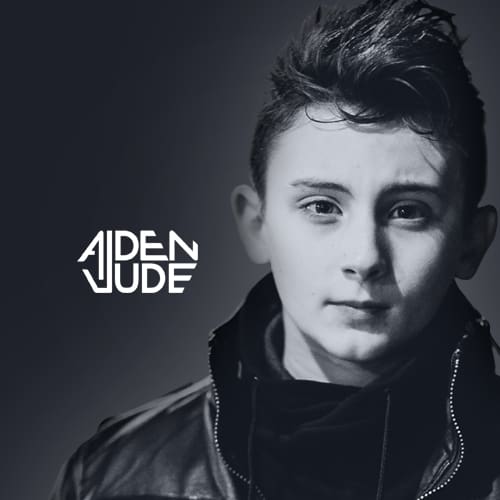 Aiden Jude is a producer, performer, DJ, and songwriter based in New York City. His spinning techniques and cutting edge tracks aside, this DJ astounds crowds with his young age. Breaking into the scene at the ripe young age of 10, Aiden is making a big impression and is already at the forefront of the next generation of electronic music producers. Having come from a family of musicians and artists, music and production are well rooted in his life.

Last May we sat down with (at the time 10-years-old) Aiden and got some insight into what it was like to be such a young DJ in such a huge music scene. About a year later, we got a chance to catch up with the 11-year-old Aiden Jude for an exclusive interview covering how his career has taken off at such a young age, what it's like to be famous as a kid, and how he deals with some of the pressure at such a young age.

Q: So Aiden, we spoke with you about a year ago, how have things changed since then?

“Things have been really great. I have been playing my favorite venues such as Marquee, Pacha and Space, and have been working in the studio with some awesome artists for collaborations. I've just been hard at work, trying to juggle school, productions, remixes, writing songs, and working on my vocals. I really want to be able to track my own vocals, just like Calvin Harris.”

Q: Since you have started to gain traction in the EDM scene, which obviously leads to bigger venues with large capacities, do you find yourself starting to get a little bit nervous before your sets playing in front of so many people?

“No not really. I really never get intimidated and I'm ALWAYS excited to perform sets. Before a show I usually just sit back and chill. I try to get myself into the zone and visualize how my set will go. I take a peek at the crowd before I go on and see how they are reacting to what the openers are playing. I am always calm and just enjoy being up there. I am never nervous.”

Q: What are some of your inspirations to writing music and how do you expect your productions to evolve as you get older?

“EDM has come a very long way I think. There are so many songs and so many genres I want to get into. With that being said, I want people to know that I can produce anything. I don't want to be ‘labeled' as a DJ who only produces one genre. I look up to The Swedish House Mafia and my uncle for my inspiration. As of right now, I expect my productions to be as perfect as I can get them. That will never change. I strive for perfection on every track.”

Q: How do you juggle school, producing music, and DJing around the United States?

“”Right now I'm currently attending the Professional Children's School in NYC with all types of performers and entertainers. It gives me such huge opportunities to expand my musical landscape. I joined the school chorus which has helped me train my vocals as well. I want to voice my own tracks in the future and the chorus has given me a huge opportunity to learn how to sing. As far as being a kid, I hang out every now and then. I go out and play basketball, goof off with my friends and just love hanging out. But I really enjoy writing music; I don't look at it as a Job.””

Q: If you could listen to one song for the rest of your life what would it be?

“My favorite all time track is Swedish House Mafia – Miami 2 Ibiza. It's the song that made me fall in love with this music and inspired me to become who I am today. I could listen to it on repeat for the rest of my life.”

Q: What can we expect from you in 2015 in terms of productions and upcoming venues?

“Expect big, big, big, music upcoming in the next 6 months. I have a few collaborations that I am very excited about. I have been hard at work in the studio this entire winter. Expect some HUGE music!”

Well there you have it music fans! Some insight into the mind of an 11-year-old breaking into the scene. Expect some huge things from Aiden Jude in 2015. It was an absolute pleasure sitting down with such a young and articulate producer!

Enjoy Aiden Jude's EDM Sauce Exclusive “2014 Throwback Mixtape” below to kick off the New Year with all of your favorite songs from the past year!