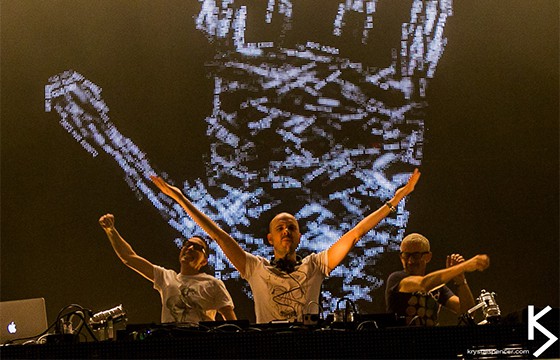 Above & Beyond celebrated their 100th Group Therapy episode with the incredible #ABGT100 event at New York's Madison Square Garden just a few months ago. The event was nothing short of amazing, with Ilan Bluestone, Andrew Bayer, and Mat Zo joining in on the lineup.

The trio took to Facebook today to release the official aftermovie of the magical event. The video starts off with the process of how they took the idea of doing #ABGT100 from a dream to a reality. We get a behind the scenes look at creating the visuals, interviews, and why they chose New York City for the celebration,

“We were thinking of all these potential venues and then somebody says, ‘Okay yeah, I think we can do MSG' and we're like no we can't do MSG, it's never going to happen. So it feels quite unreal that just in two days we'll actually finally get to do it”

It's clear that Above & Beyond really care about their fans. The video also shows the trio walking on the streets of New York meeting fans and taking pictures with them at the premier of their video for ‘We Are All We Need' in Times Square the night before.

The aftermovie ends with clips from the actual event, showing clips of the explosive energy on stage and in the crowds to their new song ‘Fly To New York' feat. Zoe Johnston. Check out the breath-taking video below.