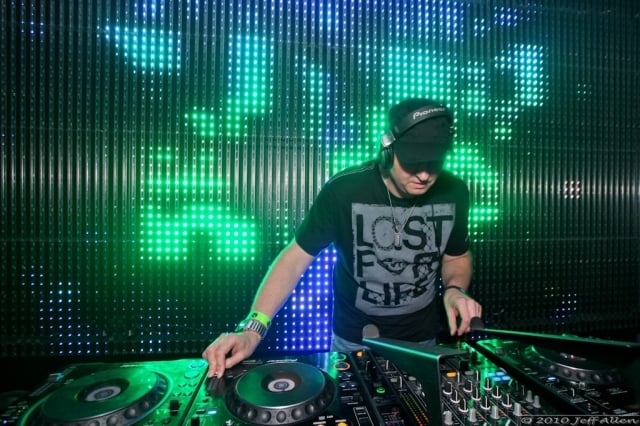 At the remodeled “Attic” in Hollywood this past weekend, it seemed like everyone in attendance was a part of DJ Dan's entourage. Some were still gushing about his set at EDC Las Vegas this year (required listening below) or random bursts of joy about being able to see him spin. Usually it was from other producers. After all, this night was about his label, Instereo Recordings, launching their second annual L.A. party with divaDanielle and Mike Balance opening up on the decks. Instereo celebrates over a decade of releasing tunes from guys like Wolfgang Gartner, TJR, Robbie Rivera, Gary Chaos, DJ Mes, WhiteNoize, Phunk Investigation, and more.

Since the early nineties, Dan's been the golden boy of house music on the West Coast and he's still keeping everyone in check (especially your drunk girlfriend). In a recent poll by DJ Times, he was named the #9 Best DJ in America. There's no lack of firepower coming from his label, either. We talked about his recent releases on Instereo like the excellent new tune “Wake Up the Funk” by Gordon John that dropped this week.

“We want to keep it funky but push it towards the tech house side of things,” he said. “The releases have been coming out more in that vein. The guy who plays techno could also play it in a funky house set. That's kind of the goal.”

In the large scope of things, we discussed the evolving trends in house that are taking shape.

“It feels like 2013 was all about people looking for instant gratification and very noisy, blasted out records and songs”

“I feel like now people are going for a deeper, funkier, sexier vibe. I find that to be much more appealing. I feel like the music now is catered more towards the woman on the floor than the guys.”

Seeing some electro producers trying their hand at deep house, his approach towards production doesn't differ.

“The thing I try to do is never jump on to any of these trends,” he explained. “I see the trends, adopt a little bit of the sound into my set. But I never go full on into it. I try to make sure that I'm playing some older records, newer stuff from techno to house genre. I try to keep it mixed up.”

So what's his style?

“DJ Dan style. I don't really play one genre. But I do it with energy. So these records, slower deep house records, come out at 118. Well, I play them at 126. It sounds like a whole different record when I play it.”

Speaking to his versatility, we saw Dan at Nocturnal Wonderland's Upside Down stage, where elevated above the crowd by some 100 feet, he dropped some gangster music on a mini-coliseum.

“Coming into this, I used to really be into ‘industrial.' It's interesting because a lot of Industrial bands would sample Run DMC and early soul and funk records. I used to mix some 2 Live Crew records into my house sets. For me, hip-hop had a huge influence on the sound that I play. I used to play hip-hop acapellas over my techno records when I was playing in 1992.”

Being able to give the audience a memorable experience runs in the family. DJ Dan's been spinning for Pasqualle Rotella since the early warehouse days, long before Insomniac. While others played fancy stages with explosive effects at Nocturnal, Dan's set brought all the vibes from the speakers. Under his black baseball hat, he's in a zone.

“I've never been totally comfortable being on stage, honestly. When people are cheering and screaming at me, I have a hard time looking at the crowd for very long. It's almost an overwhelming feeling. It's a great feeling but sometimes it's too much. I've gotten used to hiding behind my baseball hat when I'm mixing. It's almost like this shield that I have that's part of my body when I DJ. Whenever it's too much for me, I can smile and say hello and then duck back down and be behind my shield.”

He's the DJ's DJ. Underneath that brim is a mixing master. But is underground dance music gone?

“It depends on what you're looking at. If you're looking at things to be the way they were ten years ago, yes. It is totally gone. Everything has changed. If you're looking to find music that isn't totally exploited and bastardized, yes there is an underground. What that means for you may mean something different for someone else. I don't think of myself as the most underground DJ, but I do not consider myself a commercial.

If you had to put me in either room, I'd just stick with the underground. I just like music that comes from a place that somebody really searched for and hunted for, played it in a set and really tried to tell a story… that possibly you might not hear a DJ play this record the way another DJ would. It's playing with a purpose and intention. It could be different to anybody.”

This weekend, in substitute of it's now postponed festival, the EDC Las Vegas Rave-A-Thon will take place. Today, Insomniac has revealed the full lineup...